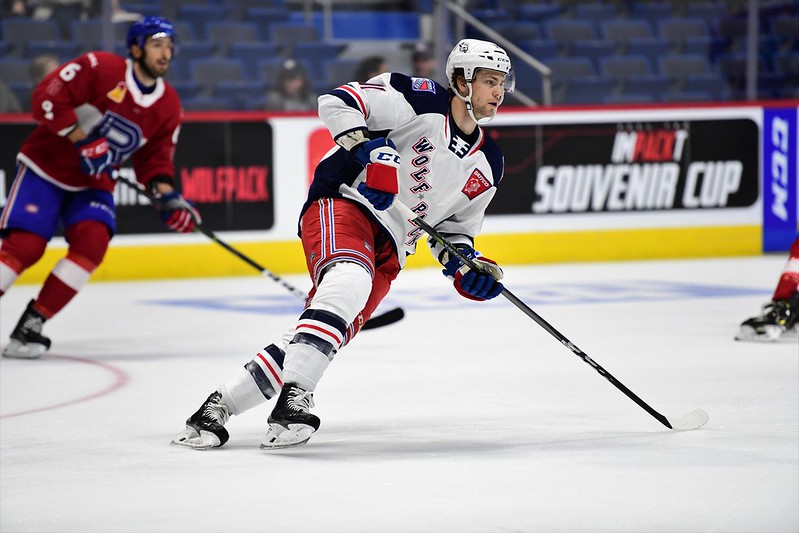 The first week of the season is in the books for the Wolf Pack, with Hartford skating into week two with two consecutive victories. In both contests last weekend, the Pack looked sharp and put on an impressive show. The Rangers of tomorrow brought their “A game” and all is well.  Let’s dissect what we’ve watched from the talented roster.

When the offense gets going, the opponent will have a tough time handling the Pack. On Friday night against Providence, the Pack came out storming and scored three goals in the first period in a little more than seven minutes of gameplay. Two goals were about a minute apart. When the group is buzzing, they are able to put up numbers. The span also consisted of a power play, short-handed, and an even-strength goal. You cannot teach that. Each goal had a type of skill involved, either from a wrist shot or to a well-executed play. For instance, here is Tim Gettinger’s first pro goal. It was a strong play by Chris Bigras with the cycle on the blue line, then a solid wrist shot by the rookie Tim Gettinger.

Check out Tim Gettinger’s first pro goal in a #HWP uniform! He had a nice wrist shot from afar. (Trying the new #AHLTV features) #NYR pic.twitter.com/6rQvg0X9YW

Shifting to Sunday’s contest, the offensive explosion happened again. This time, the span of three goals scored was in roughly two minutes with two goals under a minute apart. The Laval Rocket controlled the first half of the first period until the Pack woke up and shifted their play into high gear.

First North American goals for #NYR prospects Ville Meskanen and @MLindqvist34, followed by a John Gilmour tally give the @WolfPackAHL a 3-1 lead after 1 at the @XLCenter #LGR #FeelThemPACKt #HartCity #AHLTV @TheAHL pic.twitter.com/ZVRuV1t3wR

Comparing the two games, the Pack have scored in various ways. The contest against Providence featured the assets of slap-shots and wrist-shots. The Pack was able to snipe the puck past goalies from a considerable distance. Then, on Sunday, the group used chemistry well to their advantage with impressive 2v1 plays and passing sequences. They were unable to cash in when crashing the net, but that shouldn’t discourage them from keeping up that style of play in the future.

Hartford had nine power plays between the two contests, but Hartford was unable to capitalize. However, in both games, the group generated solid chances, especially in Sunday’s contest against the Laval Rocket. The players are able to crash the net and pick away at the puck until the goalie froze it. They generated shots and moved the puck well with the man advantage. Had the power-play converted, the Pack could’ve easily turned both contests into blowouts.

When Hartford is ready to play, they are a force. On the offensive side, they are able to play in any type of way depending on the opponent. They are able to crash the net, score from afar, and get creative when entering the zone and generating plays. The chemistry is strong early on in the season as the boys are buzzing.

The talent from the Rangers prospects is also noticeable. They are not afraid to deke or utilize their skill sets. Every player has a role and everyone is performing well.

The defensive side of the game is the weakest part of the team. However, they play hard and complete every shift with heart and effort. Shots are getting blocked constantly, the passing lanes are clogged, and on the penalty kill, the group is clearing the puck and making it difficult for the opponents to set up plays. 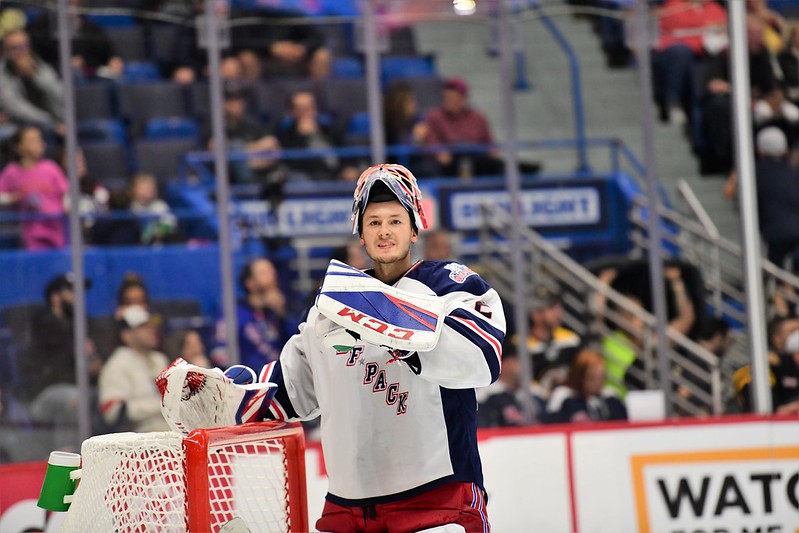 The goalie situation is perfect. Hartford has two veterans in Marek Mazanec and Dustin Tokarski between the pipes. Both played solid games when the opposing team pressured the Pack and pinched the Pack on the penalty kill.

Focusing on improvements, discipline is the most critical one for the Wolf Pack. The Pack took six penalties against Providence, then four against Laval. Hartford at times would play with an added edge but took unnecessary penalties. Being better disciplined would help the team, especially in situations where they are holding a lead or behind. Specialty teams can make or break a game and a season.

Another area of focus I want to elaborate on is the shot totals. Hartford was outshot in both games. The common theme is the Pack shoot less and less after the first period. They must maintain consistency when attacking the net. The perfect shot should not be the only option. Shooting on net gives them a chance to win games, and possibly score depending on their luck with the puck and the situation.

The Wolf Pack have strong potential this season. They have the pros and cons so far. Working on the cons is possible and not far off. Work hard and play hard is the best key to success. Keith McCambridge has a talented roster.  Everyone has their role.  Let’s keep this up boys!

Hartford will play three games this upcoming week. Two will be on the road with one at home.