Day two of New York Rangers rookie camp is set to begin at 12:15 PM ET at the MSG Training Facility with defenseman Matthew Robertson ready to take his next steps.

“It was a good summer for me,” Robertson told reporters on Wednesday. “I got a lot stronger and I worked on a bunch of things in the offseason.”

Robertson and Zac Jones are both being considered for the third pair left defense spot for the upcoming season. They will also face some competition from veteran Libor Hajek to be Braden Schneider’s partner.

Last season with the Wolf Pack, he played a strong two-game picking up 11 points in 65 contests. Not a bad first pro season. However, coming off a huge in year 2020-21 where he won the WHL’s Central Division’s Defenseman of the Year, the Rangers are expecting more.

“I’m just trying to get better each day and showcase myself,” Robertson said. “That’s all I can do. To control what I can control.”

One really interesting note picked up by reporters in attendance at practice was Robertson also taking turns on the right side.

“I’ve played left side most of my life, but I can play the right side as well,” he said.

The Rangers right side was solid when Nils Lundkvist was considered as the player behind Schneider to step up in case of injury. With his trade request, it looks like they want to make sure Robertson can be an option as well.

As for today’s practice, it will likely look a lot like yesterday’s session. The rookies spent a lot of time doing drills and getting involved in mini scrimmages. This will also be the last practice before the Blueshirts take on the Flyers rookies in a two game set on Friday and Saturday in Lehigh Valley. 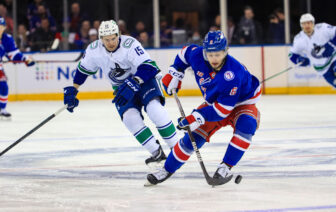