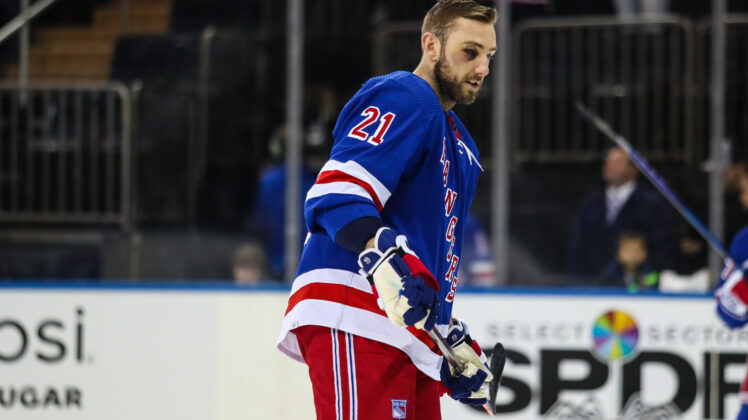 Merry Christmas New York Rangers fans! Happy Holidays to everyone. Thank you all so much for supporting Forever Blueshirts with your readership all year! We greatly appreciate it.

Now let’s get down to some news items of the day.

The NHL extended its holiday break by another day as its teams continue to cope with widespread COVID-19 cases.

The league announced Friday evening that the 14 games originally scheduled for Monday would be postponed, and play instead would resume Tuesday, Dec. 28.

Its original holiday break was slated for Dec. 24-26, but with several teams shutting down due to COVID-19 outbreaks this month, the league and the NHL Player’s Association agreed to pause the schedule two days earlier. Now the leaguewide hiatus is on the books for six straight days, Dec. 22-27.

That effectively postponed the Rangers 4th game this season which was slated for the 27th against the Detroit Red Wings.

The New York Rangers made two-time Stanley Cup champion Barcaly Goodrow a primary target this offseason. When Lightning GM Julien Brisebois sent out a mass text that Goodrow was on the block, Chris Drury jumped all over it.

Drury traded a 7th round pick for his rights and then signed him to a 6-year deal with an AAV of $3.6 million.

“Going through the process when I knew I wasn’t returning to Tampa, looking at some of the teams that were interested, looking at the lineups, the city, the ability to win maybe not just now, but for years to come, I think New York just checked all those boxes,” Goodrow told the NY Post in a wide-ranging interview.”

“It’s such a young group with a few veterans sprinkled amongst the lineup, but I think just the camaraderie and how close the team is, everyone wants success for the other person, everyone wants to win,” Goodrow continued. “I think you can see that on the ice with how we’ve performed this year. We’re doing a lot better than maybe what people would have thought heading into the season. I still think we have a lot better hockey that we can play.”

The NHL’s annual big outdoor event to kick off every new year is still on according to the Deputy Commissioner.

“Knock on wood … full speed ahead,” Bill Daly said via NHL.com. “We have a full team on the ground there in Minnesota. Everybody is excited. I know the two teams are very excited for it.”

The Minnesota Wild will host the St. Louis Blues in the 2022 Winter Classic on Jan. 1 at Target Field in Minneapolis.

NHL: One Christmas gift for every team

Happy Holidays everyone. Here’s a fun article in the spirit of the season. Read more.