The New York Rangers announced that Morgan Barron has been recalled to the active roster. Additional moves included Tim Gettinger, Lauri Pajuniemi, Tarmo Reunanen, and Jarred Tinordi all being assigned to the Hartford Wolf Pack.

Barron, 23, has one assist in eight games. Currently, Filip Chytil is a game-time decision against the Florida Panthers.

To kick off Black History Month, the New York Rangers, along with presenting partner Chase, will highlight the trailblazers who broke barriers and continue to lead the global fight for racial equality with Black History Night on Tuesday, February 1, when the Blueshirts take on the Florida Panthers at 7:00 PM at Madison Square Garden.

Throughout Black History Month, the Rangers will amplify their commitment to diversity and inclusion in the game by developing original content to recognize current and former Black NHL players and those who blazed the trail for a better game. In a cohesive effort with the NHL, the Rangers will continue to inspire and elevate the message that hockey is for everyone. 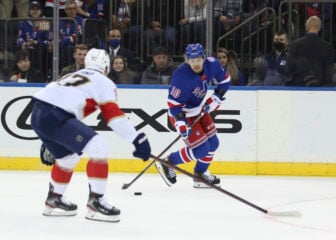 Also Read:
How to watch tonight’s Rangers vs Panthers game, plus updated schedule