Rangers Roundup: Day 1 of Development Camp; and Sabres reached out to interested teams about Jack Eichel

That will be followed up with on-ice testing for the remaining skaters. In total, there will be 16 forwards, 8 defenseman, and 3 goalies at the MSG Training Center.

Dylan Garand is the goalie to watch at camp. He spoke with us recently on being drafted and getting ready for the new season.

“I was at home watching the draft on my TV with my mom and my dad and we waited there watching until I got picked,” the 2020 4th round selection said. “It was a great feeling being drafted by the New York Rangers.”

Also Read:
Chris Drury talks Rangers kids, getting tough, and naming a captain for the 2021-22 season

Sabres reaching out to teams on Eichel

Sportsnet’s Elliotte Friedman is reporting that the Sabres met with Jack Eichel’s new representatives led by Pat Brisson. He termed it an “introductory meeting” as both sides try to keep this as quiet as possible.

“I do believe Buffalo re-engaged with interested teams to see where everyone stands,” Friedman said. “We will see where things go.”

TSN’s Shawn Simpson recently reported that Jack Eichel may have surgery “very soon” and his timetable to return would be December. If that’s indeed what is about to go down, that puts any possible trade for Eichel on hold.

Simpson also stated that the Sabres are still asking for somewhere between 4-6 pieces. They continue to demand mostly futures, including any interested team’s top two prospects which no one has remotely been willing to do.

Will a healthy post-surgery Jack Eichel fetch the return the Sabres are looking for? Only time will tell, but prior to his neck injury coming to light one team executive told me that no one is going to give what would essentially be four first picks for anyone.

A trade is inevitable but at least for now this one has cooled off. It will be red-hot again once we get to Christmas.

The question remains, were the Rangers one of the teams contacted? Or is Drury truly not interested in acquiring Eichel. 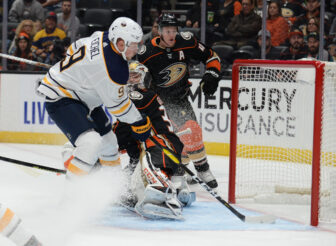 A third team may be needed to help facilitate a Tarasenko trade. Read More.