The New York Rangers will hold their Development Camp starting next week. First round pick Brennan Othmann should be the headline but many of their 2021 Draft selection will be participating as well.

Steve Kournianos of The Draft Analyst provided Forever Blueshirts with some insights into the Rangers selections that will be showcasing their talents.

Skilled forwards Ryder Korczak, (Rd 3) and Brody Lamb (Rd 4) don’t fit into your typical “physical forward” category, as they are offense-minded weapons who just happen to play hard,” he said.

As far as 3rd pick Jayden Grubbe goes, he believes that the center could be a steal for the Blueshirts. “He and Brennan Othmann were linmates for Canada-Black at the 2019 World under-17 Challenge and they blitzed opposing defensemen during breakouts left and right, but then made plays off turnovers,” Kournianos noted.

In goal, we should also see 4th round pick, Talyn Boyko. He played in the WHL last season and notched a 7-7-0 record with a .901 SV% and GAA of 3.02 with a shutout. Boyko is enormous at 6-7 and if his skills develop to go with his size, a bright future is ahead.

We will have more as the prospect invites become confirmed. 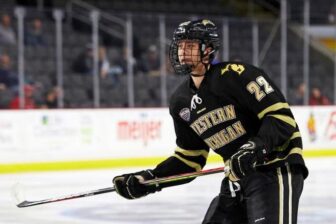 Mika Zibanejad is now a married man! He tied the knot over the weekend and was congratulated by the organization.

Zibanejad, 28, has one year left at an AAV of $5.35M. In the last two seasons he has scored 65 goals and 125 points in 113 games. That’s worth big time money, and if he hits the open market next summer he should get 7 years at $10 million per season. That’s regardless of the current flat cap situation expected to stay around $81.5 million for the next few seasons.

There’s little question that Chris Drury would like to retain Zibanejad. “Mika is a huge part of our team. I’m not going to discuss his contract or anyone else’s publicly,” Drury said recently. “I have a ton of respect for him as a person and a player.”

Mika Zibanejad has openly said he loves playing for the Rangers. There’s mutual interest as has been reported from multiple outlets. If Drury can get Zibanejad to sign a contract for 8 years at around $8 million per season, it would be a huge win for the team’s future.

Will the Habs really not match the Hurricanes offer sheet for Jesperi Kotkaniemi? Read that and more here.