The New York Rangers hit the pause with a record of 19-7-4 for 42 points. That places them third in the Metro Division and tied for third overall in the NHL standings.

While the team still has plenty of questions to answer, and that will happen as soon as they come out of the break, they’ve earned their record.

Gallant gets credit for team success

Gallant, 58, has done an excellent job as a head coach in his first year with a new team. Of course, he had a winning resume coming in by taking the expansion Golden Knights to the Cup Final in their inaugural season.

Turk, as he’s affectionately known, has done a good job mixing in the new faces and identifying roles for players. When the team was struggling early on, he instilled enough confidence in the group to find ways to win.

As the Blueshirts were getting ready for the extended holiday pause, Gallant received some high praise from one of the team’s most influential voices.

“I think (Gallant) brings a good attitude,” Trouba lauded. “He expects you to work hard. If you make a mistake it’s not the end of the world, but you’re expected to bring a certain level of effort and show up for work every day. When things are needed to be said, he says them and when they don’t, he lets you play hockey. That’s pretty nice as a player.”

Gallant urged his players to enjoy the time off and not think about hockey. However, he expects them to come back and pick up right where they left off.

“I don’t want guys thinking about our first 30 games or our next 50,” he said. “Go home and get away from hockey for four or five days. Then we come back on the 26th and start to get ready all over again.”

Return of the Taxi Squads?

The NHL was forced to postpone dozens of games and shutdown 9 teams over the last few weeks. Many teams struggled with the cap implications of making call ups during that time, which has many talking about bringing back taxi squads.

The NHL and NHLPA must create guidelines that might feature reintroduction of taxi squads and the adoption of cap exemptions in response to COVID-related roster issues. Sources have told The Post that talks on these issues began on Wednesday following disposition of the Olympics.

Last season, the NHL allowed teams to carry a four man taxi squad with a mandatory goalie and should consider doing that again. Players on the taxi squad have no impact to the team’s salary cap. I would also take it a step further and expand it to five skaters and a goalie.

If the league is hellbent on every team getting 82 games in, they need to limit postponements. Taxi squads can help. 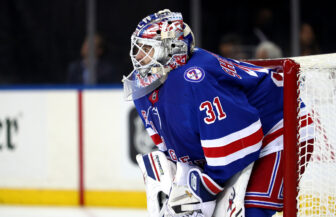 Gretzky has no doubts about Ovechkin, and Hellebuyck causes stir with comments. Read more.