Rangers Roundup: Gerard Gallant personally called Kravtsov to come back; and Blueshirts have yet to fight this season

There’s been a lot of information slowly making its way out on the Vitali Kravtsov situation. Forever Blueshirts has reported and monitored the story closely.

Today, two significant pieces of information have surfaced. The first being reported in The Athletic regarding Chris Drury calling out Kravtsov for quitting on the team in 2019 and also publicly scolding him in the Bubble in 2020.

It’s no wonder the kid doesn’t want to come back to the Rangers, but at least now we know who made the phone call to try.

Elliotte Friedman released his latest 32 Thoughts Blog and relayed that it was head coach Gerard Gallant, known for being a player’s coach that tried to smooth things over.

According to a couple of sources, Rangers’ coach Gerard Gallant personally called Vitali Kravtsov to ask the forward to consider returning. Kravtsov is in Russia, but several teams say they’ve been told he wants to play in the NHL, not stay overseas. He went home to find a comfortable spot to skate and be ready. Getting him to come back to New York will take some serious convincing, as it’s not his preference. He’d like a fresh start. New York is asking a high price for the 2018 first-rounder, but there’s legitimate interest. It’s a poker game.

Currently, Kravtsov is in Russia awaiting a trade.

Rangers have no fighting majors on the season

Ask for yourself, if someone told you the Rangers would have no fighting majors 4 games into the season, would you believe them? I mean, didn’t they beef up over the summer with Barclay Goodrow, Sammy Blais, Jarred Tinordi, and Ryan Reaves?

Didn’t they play the Capitals with Tom Wilson to start the season? That’s what Ryan Reaves was brought in for, no?

So the question I pose is simple. Does having Ryan Reaves in your lineup keep the opposition honest? Right now, that early answer is yes. 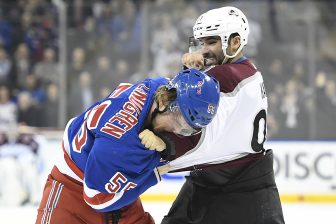 Sharks moving on from Evander Kane. More on Kravtsov, and are the Rangers in on Dylan Strome? Read more.