Tonight, the New York Rangers will face the Vancouver Canucks looking for their 6th straight road win. Gerard Gallant wasn’t happy with the Rangers after they “stopped playing” during the second period in Seattle, but was pleased with the 3-1 final.

A major issue for the head coach is turnovers. After practice today, he called on the trio of Filip Chytil, Alexis Lafrenière, and Sammy Blais to step it up.

“I need to see more from that line. I didn’t like their last game,” Gerard Gallant said. “They had a tough game, but they’ll be better tonight.”

“They know last game they didn’t play the last seven or eight minutes. We need more,” he continued. “With our lineup, I want everyone to play in important situations. when you’re not playing well, you won’t play in those situations.”

The biggest issue that lined faced was making poor decisions with the puck which led to too many giveaways. It caused numerous issues from being pinned in their own zone to defensemen unable to make line changes.

“We talked about not turning pucks over,” Gallant explained as to why they were benched in Seattle. “Important times of the game, close hockey games, you’ve got to make sure you’re managing the puck. When you’re winning 2-1 with 5 minutes left, you’re putting guys out there you’re comfortable with.”

“It’s going to be a fresh [start] tonight,” he said. “Go back and play real good and you’ll go back to your regular turns.”

Gallant would not commit to his starting goalie, but signs are pointing to Igor Shesterkin getting the nod again. And why wouldn’t he? His road record and numbers are ridiculous with a fours wins in four starts and a 0.99 GAA!

It also looks like the lineup may be the same as it was in Seattle, which means Nils Lundkvist will be scratched again in favor of Jared Tinordi. As to why, Gallant simply said that it’s his decision and that’s the best lineup he feels he needs to win the game. 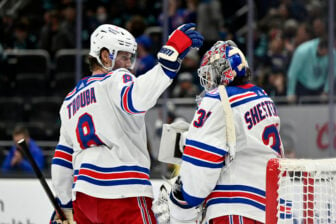 Also Read:
Rangers vs Canucks by the numbers: Going for road win six

Vitali Kravtsov loan expected to be made official

Forever Blueshirts has learned via a KHL team executive that Vitali Kravtsov is expected to play in the KHL this season. Another NHL source confirmed similar information. The original report came out of Russian media outlet Sport24.

Also Read:
Report: Vitali Kravtsov to be loaned to Traktor in KHL

So about that Jack Eichel trade. Read what the hold up could be here.