Rangers vs Canucks by the numbers: Going for road win six

The New York Rangers will face the Vancouver Canucks for the first time this season. Boasting the best road record in the NHL (tied with the Flames), the Blueshirts look to build off their last game in Seattle.

These teams will meet for the first time since January 4, 2020. The Canucks picked up the home win 2-1.

The Blueshirts current five-game winning streak on the road is tied for the 11th longest streak in franchise history and longest since winning nine straight from Jan. 16-Feb. 27, 2020.

Artemi Panarin – 12 GP, 2G-8A—10P – Panarin has eight points (1G-7A) in his last six games against the Canucks and has three points on the power play. On March 31, 2018, Panarin had four assists in Vancouver as a Columbus Blue Jacket.

Rangers dangerous in the third period:

The Rangers have scored 13 goals in the third period, tied for third most in the NHL.

Rangers strong with a lead:

The Blueshirts four wins when leading after the first period is tied for 4th in the league.

Chris Kreider’s 7 goals on the season is tied for 2nd in the NHL. Alex Ovechkin leads with 9.

Adam Fox has 9 points in 9 games this season and has just signed a 7 year extension. Going back to last season, his 56 points leads all defensemen in scoring.

Chris Kreider’s hot start has him hitting and reaching several milestones this season:

Barclay Goodrow is 3 points away from 100 career points.

Adam Fox is 2 points away from 100 career points. 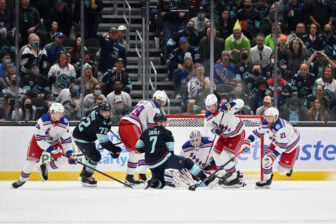