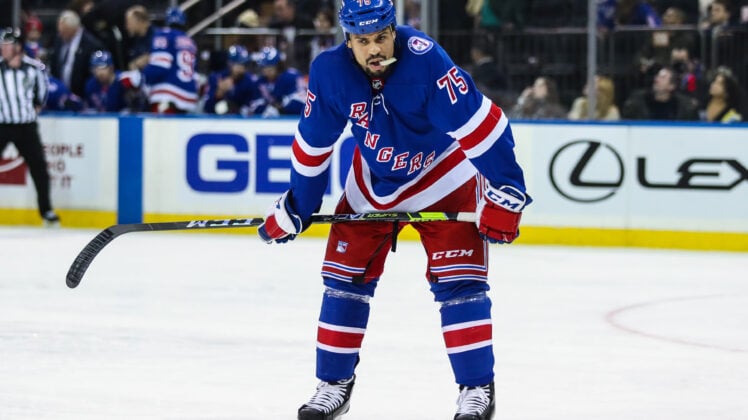 The New York Rangers held a team practice before heading out to Carolina to take on the Hurricanes.

Prior to stepping on the ice, the team announced recalls for Jonny Brodzinski, Tim Gettinger, and Zac Jones to the taxi squad.

It was a full practice, so no COVID related issues triggered the moves. However, the team only had Morgan Barron and Tyler Wall available in an emergency. Teams can carry up to six players on the taxi squad.

Ryan Reaves recorded his second career two-goal game as the Rangers won for the seventh time in 10 games (7-3-0). Of course, it was his first goal as a member of the Blueshirts and it led to a big 6-3 win over the Maple Leafs on Wednesday.

“It felt great,” Reaves said after the game. “You never want to go three months without scoring and I tend to do that a lot in my career. It felt good to get (those goals) out of the way. Hopefully, they keep coming.”

When Reavo, as he’s affectionately known scored his first goal the Garden rocked. After his second goal, it left his teammates even happier.

“It was a pretty special night for him. Especially, the night before his 35th birthday,” a smiling Kevin Rooney said. “I think a lot of guys really happy for him.”

“I told him it was a great celebration,” Ryan Strome recalled. “When your heart and soul guys get on the board it does so much for your team.”

“Well it about time,” Gallant said with a smile. “We love Reavo but he gets around that net and he scores big goals.. He started the comeback for us.” 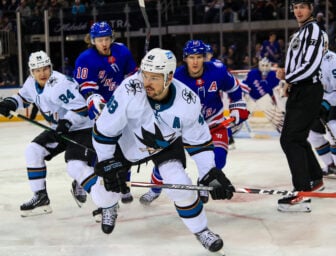 The New York Rangers selected 6-0, 175-pound forward Brennan Othmann 15th overall in the 2021 NHL Entry Draft. He had an impressive camp for an 18 year-old and appears to have a bright future.

This season for the Flint Firebirds, he’s registered 46 points in 31 games on the strength of 26 goals.

“Obviously it’s a tremendous honor to be named the captain here in Flint,” Othmann said in a team statement. “To follow in the footsteps of Delly (Ty Dellandrea) is special. I’m appreciative of the coaching staff, front office and of course my teammates for trusting and believing in me to step up in this role.”

The Firebirds selected Othmann in the 2019 OHL Draft with the second overall pick. He has scored 79 points in 86 career games with Flint.

“Brennan has evolved into the leader of this team,” Head Coach Ted Dent said. “The way he plays and competes every single night is exactly what we’re looking for in the culture we’re trying to create here in Flint. We feel it’s the right time to put the ‘C’ on a player who fits the mold of what a captain should be.”