The New York Rangers and Kaapo Kakko are looking at a 5 PM ET CBA deadline for qualifying offers (QO) on Monday.

A quick look at the list and the only player that will definitely receive a qualifying offer is Kaapo Kakko. It’s also likely the Rangers will qualify Libor Hajek and Tim Gettinger. One player that will not be receiving a QO is Ty Ronning.

Kakko, 21, posted 18 points in 43 games but was on the injured list three separate times. For his three-year career, he’s managed just 58 points in 157 matches. Without salary arbitration rights, the Rangers have all the leverage. A 2-year bridge deal around $2M AAV is the most likely outcome.

The Colorado Avalanche signed pending RFA goalie Alexandar Georgiev to a three-year deal on Sunday for an AAV of $3.4 million.

“When he was a starter, he played really well, and he wanted a bigger opportunity, and he’s got that opportunity,” Avs GM Joe Sakic said. “He was looking forward to the challenge. What I like about it, he played in a big market. He was in New York. He can deal with a lot of that stuff. We’re excited for him.”

The Rangers traded Georgiev’s rights on Draft Day in exchange for a third and fifth-round picks in 2022, plus another third in 2023.

“I just wanted to take the moment to thank the NY Rangers organization for giving me a chance 5 years ago! That’s all I ever needed,” Georgiev said in a farewell note on IG. “From getting the first nhl call up and reading the Letter to seeing this team become a contender and make a run at the cup. From playing in covid bubbles to having full stadiums with celebrities behind the bench, it’s really been a journey full of memories.

“And even if that journey wasn’t always smooth, it’s been an honor putting on that Jersey. Thank you to all the staff at the arenas who made you feel like part of a family. And big THANK YOU to all the Rangers fans who are so passionate, it was incredible playing in front of you all.”

Patrik Nemeth is one of the top candidates to be bought out. The process can began today with the Rangers placing him on waivers for the purpose of a buyout.

New York stands to gain $1.5 million in cap space this season and his full $2.5 million hit in 2023. That will be followed by a -$1M penalty for two seasons thereafter.

The 30 year-old defenseman finished with 2 goals and 7 points in 63 games this past season. 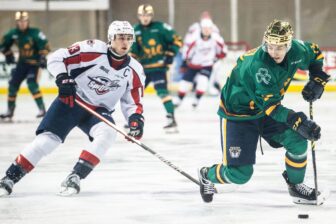 The opening bell for NHL Free Agent Frenzy will sound in a few days on July 13 at Noon Eastern. This offseason boasts a great free agent class with plenty of excellent unrestricted players available. Read More.