The New York Rangers have sent the negotiation rights of pending RFA goaltender Alexandar Georgiev to the Colorado Avalanche in exchange for three picks.

This is an absolute tremendous deal for GM Chris Drury as the Blueshirts were not expected to extend Georgiev his $2.65M qualifying offer and thus make him a UFA.

GM Joe Sakic wasstill in talks with pending UFA goalie Darcy Kuemper but it now appears he’s out of the mix.

The New York Rangers found themselves in a good position to get something for goaltender Alexandar Georgiev before the NHL Draft.

The 26 year-old undrafted netminder has been looking for an opportunity to become a stater dating back to last season. There were certainly several teams interested in acquiring him near the trade deadline and a rumored deal with the Arizona Coyotes that fell through when Igor Shesterkin was hurt in January.

While he may not be affordable to the Rangers as an RFA being owed a $2.65M qualifying offer, other teams with pending UFA goalies may jump at the chance to grab him. The Avalanche, which ultimately were able to acquire him was one of the teams in the mix including Edmonton Oilers, Toronto Maple Leafs, and New Jersey Devils.

The Rangers will now look to fill his role as the backup with a proven veteran. Names to watch are Thomas Greiss, Martin Jones, and Jaro Halak. 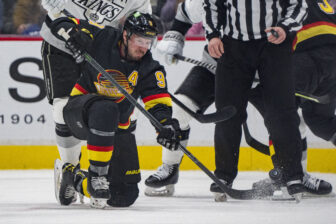 Also Read:
New York Rangers appear to be the frontrunner for J.T. Miller