Rangers likely to buyout Patrik Nemeth, and will Alexandar Georgiev get traded 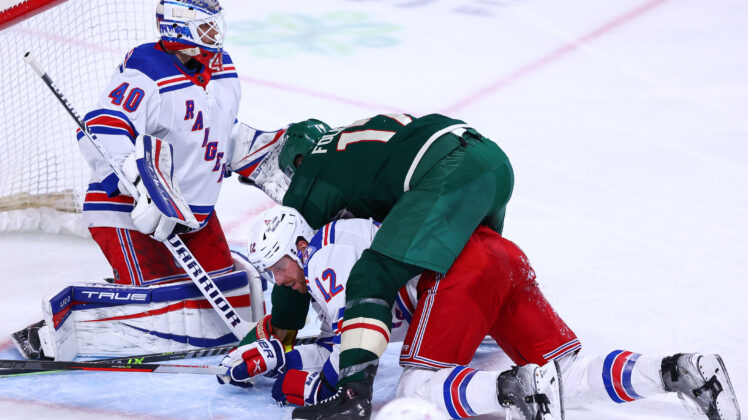 The New York Rangers will be present at tonight’s NHL Draft being hosted in Montreal. The Canadiens hold the first overall selection while the Rangers have no picks after completing the conditions of the Andrew Copp trade. Winnipeg now has that selection which went from a conditional second-round pick to a first after reaching the Eastern Conference Final.

Chris Drury is also up for the Jim Gregory Award as GM of the Year. Despite having an amazing first season as a general manager, Forever Blueshirts has been told that’s he unlikely to win it.

Here’s a quick look at the Rangers’ picks and where they are slotted:

Update: The Rangers have acquired a 3rd and 5th round pick in the 2022 Draft from the Avalanche for Alexandar Georgiev. Full details here.

While the Rangers have four picks at this moment, any trades over the next two days of this draft could increase or decrease that amount.

Since they were eliminated, Chris Drury has been working the phones to trade Patrik Nemeth and Alexandar Georgiev with little success. As the insiders love to say, that could all change with a phone call.

However, when it comes to Nemeth a buyout is the most likely scenario to get some of his $2.5M AAV for the next two seasons off the books.

The 30 year-old defenseman finished with 2 goals and 7 points in 63 games. Nemeth had -9 rating but posted solid numbers in the blocks (102) and hits department (115). The biggest issue was his inability to suppress shots despite who his partners were as he finished the season with a 40.7 CF%.

Forever Blueshirts was told that trading Nemeth’s entire cap hit would require attaching a second round pick. Considering the few selections the Rangers have they are unwilling to do so.

According to Larry Brooks of the NY Post’s latest reporting the Rangers are likely to buyout Nemeth before the first buyout window closes on July 12. That’s also the day before Free Agency opens.

Per CapFriendly’s buyout calculator, a Nemeth buyout would add $1.5M this offseason to work with. It’s even bigger in 2023-24, where the full $2.5M is back on the books. That’s just in time for Alexis Lafrenière, K’Andre Miller, and Filip Chytil’s new deals. There’s a -$1M penalty for two seasons after which the Rangers can easily manage.

Rangers asking for too much for Alexandar Georgiev

Over the last week, multiple reports indicate that the Rangers are asking for a high pick or a prospect that is waivers exempt for the rights to Alexandar Georgiev.

There were teams interested in acquiring the pending RFA since January, but from what I gathered the best offer received came from the Edmonton Oilers and it was a mid-round pick.

The Colorado Avalanche also had some interest, but as they work to re-sign Darcy Kuemper they’re likely no longer in the mix. It was also rumored that the New Jersey Devils had some interest but they’ve set their sights on UFA Ville Husso. One other possibility are the Toronto Maple Leafs but they’re targeting Marc-Andre Fleury in free agency.

At this time it looks like Drury overplayed his hand. Georgiev is owed a $2.65M qualifying offer on July 11th and it’s unlikely the Rangers will extend it and thus make him a UFA on July 13.

Teams knew this, which is why the ask was nonsensical to them. Maybe tonight, if Drury comes down drastically the Rangers could get a third or fourth round pick for his rights.

The NHL Draft is tonight and the trade rumors are buzzing around the league. As general managers meet with the media in preparation for first round selections, there’s plenty of speculation buzzing. Read more.