New York Rangers appear to be the frontrunner for J.T. Miller

The NHL Draft’s first round takes place on Thursday night in Montreal with the New York Rangers having no pick but plenty of intrigue. That’s because they need to fill their second line center position for next season and appear to be the frontrunners to land J.T. Miller in a trade.

Reports on Wednesday indicated Miller’s agent and the Canucks were not optimistic that they would be coming to terms on a new deal. This cranked up the rumor mill as to what the future holds regarding the 29 year-old center, who racked up 99 points in 80 games last season.

Elliotte Friedman was recently on the Donnie & Dhali Show speaking about where things were at with J.T. Miller.

“I think they move him at some point. We will see where this goes over the next 24 to 48 hours. It’s in Vancouver’s court,” he said. “I think a couple of teams that we look at are Washington and the Rangers. I also assume there’s more out there that we don’t see.”

Miller, 29, was the Canucks leading scorer this past season. He has one year left on his current deal which comes at a very affordable $5.25M cap hit. Even though they would like to keep him, Vancouver won’t be able to accommodate his next contract which is speculated to be between 5-7 years and an AAV around $8.5M.

The Fourth Period’s David Pagnotta reported late yesterday that Vancouver has a six-year offer on the table. A team executive informed me that he expects Miller to take his chances and test unrestricted free agency next summer.

That may make some teams hesitant, but it appears the Rangers may be willing to give up a fair package for his services this upcoming season. The latest rumblings seem to have them as the team closest to acquiring Miller. The package is unclear, but at the trade deadline it was reported to be at least three pieces.

Chris Drury balked at the and would likely do so again if it remains unchanged. But there’s been some indication that Vancouver may be willing to be more negotiable this time around. Several insiders have pointed to what the Kings gave up to acquire Kevin Fiala from the Wild, which was a first round pick and a prospect.

If the Canucks are more amicable to something similar, the Rangers could easily offer their 2023 first-round pick, Nils Lundkvist, and maybe another mid-tier prospect to get a deal done. Two other names linked in possible trade for Miller are Filip Chytil and Kaapo Kakko, but I find it difficult for Drury to be willing to part with either for a player that will likely be here for just one season.

The Rangers are cap-strapped for the next two seasons. They have to extend several RFA including Kakko this summer, then Alexis Lafreniere, K’Andre Miller, and Filip Chytil next year. That’s why they are looking at short-term solutions for their second-line center.

New York is also exploring other options, but the price for the Jets Pierre-Luc Dubois is too high both contractually and in players. A more perfect target was Mark Scheifele but he currently appears to be off the table.

What thing to note is that the Vancouver Canucks do not have to trade Miller this summer. He has one year left on his deal and his value should hold just the same at the next NHL Trade Deadline. 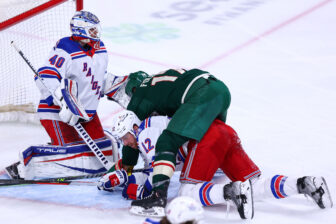