The New York Rangers have announced that Morgan Barron has been recalled to join the team.

Today at practice, both Barclay Goodrow and Kevin Rooney did not participate as they were both listed as maintenance days. Greg McKegg remains on the COVID protocol list.

The New York Rangers selected 6-4, 220 pound forward Morgan Barron in the 6th round (174th overall) of the 2017 NHL Entry Draft. He’s a winger turned center and doing well in the AHL playing in all situations.

In 15 games for the Wolf Pack he has registered 6 goals and 9 points.

It’s possible that either Rooney or Goodrow may be unavailable for tomorrow’s contest against the San Jose Sharks to prompt the call up.

Last night in the team’s win over the Flyers, Goodrow took a puck to the face that shattered his visor and caused a cut over his eyes. “[Goodrow] got some stitches,” Gerard Gallant said. “He’ll be fine tomorrow but I’m sure the eye is going to close a little bit.”

The Blueshirts will play back-to-back games Friday against the Sharks and Saturday against the Chicago Blackhawks. Igor Shesterkin is likely to get the nod tomorrow, and Alexandar Georgiev will get the Hawks as Gallant will split the games.

“They are probably going to each play a game but I’m not going to tell you who is starting tomorrow,” Gallant said. When pressed if one goalie could start both, he said it was unlikely.

The head coach also explained he chooses not to announce his goalie early because he doesn’t want to do the other team’s work for them. He’d rather let them guess. 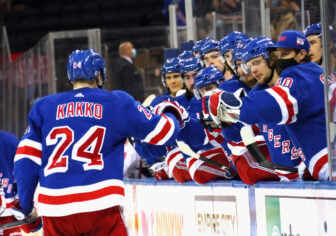 Rangers have some frontrunners for awards

Who will win the Vezina? Who has the edge for the Norris and MVP? Projected winners here.