The New York Rangers held practice today in San Jose in preparation for tomorrow’s matchup against the Sharks.

Igor Shesterkin and Julien Gauthier, both on the COVID list and beyond the five day quarantine requirement were not at practice today. While it is still possible they could be cleared for the game, expect Alexandar Georgiev in goal. Also absent from today’s group was Adam Fox due to maintenance.

However, strapping young blue-liner Braden Schneider was there partnered with Patrik Nemeth as the third pairing.

Schneider, 20, has picked up nine points (all assists) in 24 games with the Pack this season. The 6-2, 202 lbs defenseman is a physical presence on the blue-line that likes to hit hard and often.

The Saskatchewan native was drafted by the Rangers in the first round of the 2020 NHL Draft. New York moved up to select him 19th overall by exchanging their first round pick (22nd overall) and a third round selection with Calgary.

Knoblauch is also Schneider’s coach in Hartford so he knows his game well.

“One thing that players have trouble with coming to the National Hockey League is eliminating plays,” Knoblauch explained. “Braden’s young but he should make that transition easily when he gets his opportunity.”

That opportunity may come as soon as tomorrow. When Schneider was asked whom he would compare his game to he quickly said Montreal Canadiens defenseman Shea Weber.

“Maybe not as hard as a shot,” Schneider joked. “Just being a solid, big, reliable, physical defenseman that can play both ends of the ice. The main thing is to take care of home base.”

“I want to show that I can play at this level and that I belong here.”

Artemi Panarin is back from COVID protocol and Alexis Lafrenière is trying to get acclimated to switching wings. It’s a move that the Rangers first overall pick openly admitted he was not 100% comfortable early in the season.

“I played left wing my whole life, so obviously I’m most comfortable there,” Lafrenière said on Wednesday. “I’m ready to try and adjust to right wing and play the best hockey that I can.”

Lafrenière has played well since being given the opportunity and more ice time with Panarin out. The 20 year-old had a nice little scoring stretch but tapered off with no points in his last three games. For the season, he has 11 points (8G, 3A) in 37 games.

“It’s a little different coming back to your own end playing right,” Lafrenière said of the adjustment. “I’m comfortable. It’s going to take a couple of games but I think I’ll learn.”

Alexis was on the right side in L.A. and said that it was fun playing with two of the best players in the NHL in Panarin and Ryan Strome.

“Bread is one of the best players in league, to just be able to play with him, it’s good,” he said smiling. 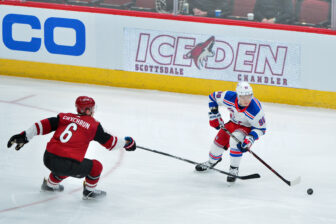