The New York Rangers are right back to work after a disappointing showing in their preseason opener. Obviously, there’s no reason to ring alarm bells or even raise caution flags. Aside from the defense pairing of Adam Fox and Ryan Lindgren, everything was new for the team.

“It’s an exhibition game and I’m disappointed obviously,” Gerard Gallant said. “We didn’t play that well, and we didn’t play hard enough. We weren’t good enough for sure.”

Gallant will get his team back to work today. Here’s the schedule:

The Rangers lost Barclay Goodrow less than 5 minutes into the game on a boarding call. Third liner, Dryden Hunt was moved up to the second line and played very well. He and Chris Kreider led the team in shots on goal with 4 each. Dryden also played an energetic 18:25 and impressed his coach.

“He stood out more than most tonight to be honest with you,” Gallant said. “For the most part, he took advantage of his minutes for sure. He’s the guy that as soon as we got off the ice we talked a little about.”

Hunt signed a one-year, two-way deal for $767K this summer. He scored 8 points for Arizona last year in 26 games, and is fighting for a 4th line role. He could be a candidate as the 13th forward and his effort last night helped him inch closer to making the team. 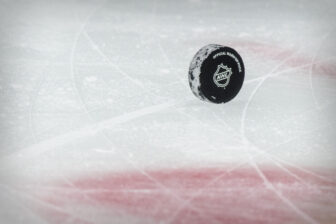 Nils Lundkvist on his debut

“First game at MSG was a fun experience,” Lundkvist said after his debut. “It was real fun.”

Last night, Lundkvist was one of two skaters for the Blueshirts to play over 20 minutes (21:11). Adam Fox led all Rangers with 23:56. Nils was even on the night and registered two shots.

“It’s been an adjustment,” he admitted. “You need to play more at the central of the ice. Back home (in Sweden) when you’re in the dots you have a lot of space. When you’re out there, you’re close to the boards – so it will be an adjustment. It’s getting better and better.”

The Blueshirts first round pick, credited his defense partner and fellow countryman for helping him adjust as well.

“We are building up chemistry – getting to know each other both on and off the ice,” Nils said about his partner Patrik Nemeth. “He’s someone that can teach me to play in the NHL and living the NHL life. He’s been a big support to me.”

The Seattle Kraken made their debut and came out on top. That and more here.