The New York Rangers and their fans wake up this morning and can enjoy looking at the standings which show them at the top of the hockey world.

It’s been a remarkable season for a team many considered to be a borderline playoff team. By beating the Oilers at MSG on Monday, it was their third straight win to go with points in five of six games (4-1-1). Their 22 wins gives them the tiebreaker with the Washington Capitals as both have 48 points.

After the game, Gerard Gallant emphasized what the last few wins have been all about, which includes a sweep of the defending champs.

“Like we talked before the game about twenty guys playing — twenty guys showed up and played hard,” Gallant explained. “It wasn’t about one line or one player, it was about a team group, and they did a great job.”

Ryan Strome, who has been a vocal team leader led the offense with a goal and two assists. Despite Artemi Panarin being out the last two games due to COVID protocol, Strome has stepped up his play. However, when asked about the win he focused on the total team effort.

“The last few nights have been just a really good team effort all around top to bottom, ‘D,’ forwards, goalies,” Strome said. “It’s been nice to see. I think maybe the [holiday] break did us well. The rink is buzzing. Guys are excited and happy. It’s a good feeling.”

New York now hits the road for five games starting with a big matchup against the Vegas Golden Knights.

Head coach Gerard Gallant surprised a few people by scratching Nils Lundkvist when Ryan Lindgren returned to action. Instead, he kept Zac Jones in the lineup and moved him to the right side to partner up with Libor Hajek.

The 21 year-old had another excellent game playing 15 minutes. He also recorded 1 shot, 1 block, and 2 hits.

“I was a little star-struck last year,” Jones said yesterday. “Now it’s a business and I’m here to play hockey and help the team in anyway I can.”

His play has certainly garnered the attention of the man who controls the lineup.

“He looks confident out there,” Gallant said. “We want to see him a little bit. He played a good first game and tonight he was good again.”

Whether or not Jones remains in the lineup when Patrik Nemeth returns from a non-covid related issue remains to be seen. However, it may help Chris Drury to know what he has in Jones before heading out and getting a rental defenseman at the deadline. 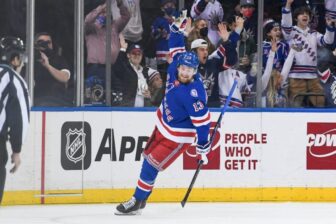