Rangers Roundup: Zuccarello gets some payback, Zibanejad upset with call, and more

The Minnesota Wild opted to sit on the visitors bench for the entirety of the ceremony honoring Henrik Lundqvist. They certainly didn’t have to but their head coach, Dean Evason wanted them to see what putting in the work can lead to.

One player that would not miss it was former Ranger and close friend to Hank, Mats Zuccarello.

Zuccarello was critical of the Rangers

When Henrik Lundqvist was bought out by the Blueshirts, he did not say much. The same can’t be said of Mats Zuccarello, who ripped the team in the papers.

“It’s absolutely upsetting that he is being treated that way,” was Zuccarello’s opening salvo to VG. “Did anyone ever think that this was going to happen to Henrik Lundqvist? No one!.”

Mats was traded away from the Rangers in 2018 and was very bitter with how the Rangers handled the whole situation.

“I never thought it would happen to me either. In my eyes, I was going to end my career with the Rangers,” Zucc explained after 9 seasons in NY. “I think Hank would, too. Everything was going to be fine and great, but then management decides, and then you’re not worth shit.”

Last night, Zuccarello got a modicum of revenge by scoring the game-tying goal in the second period and the assisting on the game-winner in the third.

“It’s huge for him and his family,” a reserved Zuccarello said before the game. “It’s going to be cool for me to experience that and be a part of that.”

The Hobbit, as he was affectionately known took the ceremonial face-off with the crowd chanting “Zuuuuuccc”. After Lundqvist dropped the puck, they embraced one more time on Garden ice.

Mats then took it to the Rangers the rest of the evening.

Zibanejad upset over no goal call

The game ended with a little bit of controversy as it appeared Mika Zibanejad tied it with a second left on the clock. However, the referee waived it off for goalie interference to send the Rangers and their fans home unhappy.

“I obviously don’t agree with it– I can’t say much more than that,” Zibanejad said afterwards about the call. “Honestly, it just sucks we couldn’t end the night on a better note.” 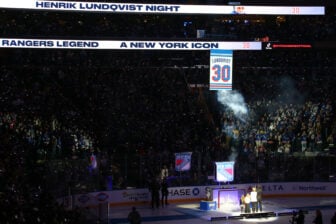 Nathan MacKinnon and Adam Fox may miss the All-Star Game due to injury. Read more.