That was most evident in the opening period when the Rangers were outshot by a 13-7 margin but held a 1-0 lead at the buzzer. His goaltending allowed the team to build some confidence and ultimately walk out of Ottawa with a 3-1 victory.

“I’m just trying to help the guys gets some points and win some games,” Halak said via the team’s YouTube channel. “It’s a big win for me personally but two points for the team to move up.”

Coming into the match, Halak was 0-5-1 and struggling to make key saves when the team desperately needed them.

“We won as a team and played hard as a team,” Gerard Gallant said. “It’s great for [Halak] to get his first win. He played outstanding.”

Rangers should go back to Jaroslav Halak

It was really great to see Halak dig in his skates and come up with a vintage performance that the 37 year-old backup is known for. He’s considered a goalie who battles hard to stop pucks and that’s exactly what he did for the Rangers on Wednesday night.

By doing so, Halak became the seventh goalie in league history to win at least one game with seven different clubs.

“He’s a real pro,” Mika Zibanejad smiled. “He’s been fighting and he gave us a chance to win. It was nice to see him get the first one.”

Now that he’s notched his first win, it would behoove Gerard Gallant to get him on a little roll by playing him again versus the Senators at the Garden on Friday night. He’s familiar with the opponent and knows what they’ll bring.

It also makes sense because the Rangers are playing a back-to-back set with the Chicago Blackhawks come into town on Saturday. Since Halak was likely to play in one of these games anyway, it wouldn’t hurt to give Igor Shesterkin a little more time off to reset himself with more practice work. Especially after two tough losses where he used the word “ashamed” to describe his recent play.

The Rangers need both their goalies to be on top of their game going forward. Getting Halak on a roll would not only benefit Shesterkin in the long run but the team as well.

“It’s a long season and we need everybody to play well,” Halak explained. “You saw it tonight, it takes everybody to win a game in this league. There are no easy games anymore.” 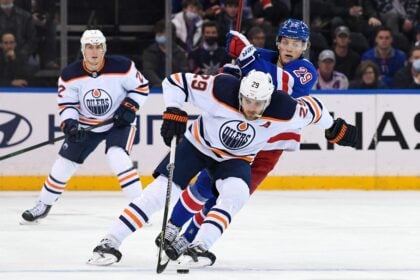