April 17th 2021, Pavel Buchnevich rang in his 26th birthday by scoring a hat-trick! The Hockey Gods helped the Rangers leading goal scorer at the time complete the feat with an empty-netter. Chris Kreider would add a second empty net goal right after and the Blueshirts skated out of MSG with a 6-3.

After the game Buchnevich was asked if a hat-trick was the best birthday present he ever gave himself. “Yes. Too bad it’s only one per year,” he said while laughing. His head coach was complimentary of him, noting Buchnevich’s 200 foot game and the amount of points he has without being on the top power play.

Buchnevich is the first and only Ranger to score a hat-trick on his birthday.

The Blueshirts jumped out to a 3-0 lead on two goals by Pavel Buchnevich and one by Ryan Strome by the end of the first period. Artemi Panarin scored his 16th goal of the season to make it 4-0 until Michael McLeod finally broke through on Igor Shesterkin in the second stanza. The goal snapped the rookie net-minder’s shutout streak at 152:37 and gave the Devils their first goal against him in 199:33 minutes dating back to the March 4th game where he injured himself.

In the third period, the Devils scored two quick ones to cut it to 4-3. David Quinn recognizing his team let up called a timeout. At the bench you could see the coach’s passionate plea to get back to smart hockey and playing defense. The Rangers responded and didn’t give up another goal in the remaining 13:22.

“We’ve talked about this, New Jersey, Buffalo, the teams that are out of it, they’re going to play their [tails] off and if we think it’s ever going to be easy we’re sadly, sadly mistaken,” Quinn said. “I wasn’t surprised with the pushback we got from them. … We have a very, very difficult game tomorrow, that’s for sure.”

Before the game was said and done the birthday boy sealed the game with an empty net goal for the trick. Buchnevich finished the season with 20 goals and 48 points in 54 games. He is a restricted free agent with arbitration rights this summer. For more on that read the following article. 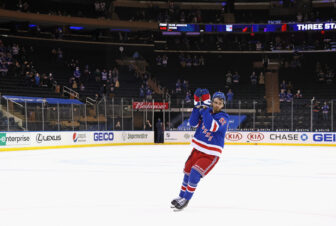 Are the rumors true? Will Rod Brind’Amour leave the Carolina Hurricanes? Read it here.