This morning, TSN Insider Darren Dreger updated the Jack Eichel situation. “Sources say the Eichel saga may be shifting,” he tweeted. “Ongoing discussions and additional access to Jack Eichel’s medical file has helped teams with trade interest clearly see his situation. Both sides are hopeful something can be worked out soon with one of the clubs in the mix.”

Forever Blueshirts has learned the New York Rangers are indeed one of the clubs in the mix and could be the closest to a trade.

This past weekend, I reported that a source familiar with the Rangers told me that they were still the most likely destination. The Rangers have $9 million in cap space to play with and can move out salary in other deals to accommodate Eichel’s contract. It’s also been reported by multiple outlets that they made an offer before the start of last season, all the way up until the NHL Draft.

Upon the latest news from Dreger, I followed up with the same source who relayed that the Blueshirts have been heavily involved way before any official trade request. In particular, Chris Drury has been close to this from the onset.

If you recall, there was a report that Drury was telling agents he wasn’t sure where this interest in Eichel was coming from. I mentioned that it sounded odd at the time and likely was Drury not looking to tip his hand.

Today, the Rangers are very much in the mix, and are likely the team that Eichel is hopeful a deal will be worked out with soon.

The biggest roadblock to a potential deal has been the neck injury and subsequent surgery.

Eichel’s dispute with Buffalo has to do with what surgery will be performed. What most likely will happen is the acquiring team will approve the artificial disc replacement Eichel wants. He may have to sign a waiver taking the team off the hook if the procedure leads to him not playing again.

It would also be wise that any deal for Eichel with Buffalo come with conditions. That way if Eichel is unable to play, the acquiring team will not be left holding the bag.

In his latest 32 Thoughts Blog, Elliotte Friedman states: “No one will go on record, but there is a growing belief there are teams willing to accept Eichel’s preferred disc replacement.”

Assume that the Rangers are amicable to this surgery and must have confidence that it will be a success.

Making it all work

As I’ve mentioned in the past, the Rangers have the assets, cap space, and desire to make a deal for Eichel. While things may have changed a little, a package that included Zac Jones and Vitali Kravtsov was told to me last season. Both those players could still be part of any trade for Eichel.

Another thing to take into consideration is that the Rangers will likely trade for Eichel, let him have the surgery, and then place him on LTIR. That means there’s no rush to move anyone else out (i.e. Ryan Strome).

Looking ahead, the Rangers can have both Zibanejad and Eichel on the same team. That would likely mean working out a new extension with Mika for under the rumored $10 million AAV, and closer to $8 million. As far as Adam Fox, a bridge deal would be cheaper than a long-term deal for the foreseeable future. That’s how the Rangers can have their cake and eat it too for this season and next.

Remember, the Rangers can clear up significant cap space in the summer of 2024 when Kreider’s contract and Trouba’s contract lose their full no-trade protection. Each will have a modified NMC and need to submit a list of teams they won’t accept a trade to.

Eichel, 24, is one of the game’s top centers. In his young career, all with the Sabres, he has scored 355 points in 375 games. This should be an interesting few days in the NHL rumor mill. 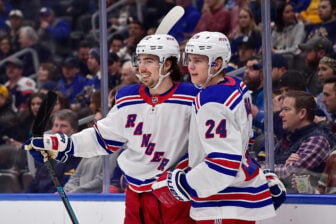