The New York Rangers roster is basically set. I would even argue that Nils Lundkvist has already made the team as the 6th defenseman despite Gerard Gallant stating that spot is still open.

Zac Jones, who is a lefty would likely have made this team if not for the Rangers signing veteran Patrick Nemeth over the summer. The 20 year-old blue-liner had an uphill battle to make the team out of camp, but has certainly shown that he is ready to step in and play NHL minutes.

Let’s look at some key questions that hopefully can be sorted out in the final two exhibition games which start tonight against the Devils and ends Saturday versus the Islanders.

The Rangers have two top lines thanks to Artemi Panarin. For argument’s sake, since Mika Zibanejad is the team’s top center, we will call his unit 1A. Last season, the KZB line was extremely productive and Pavel Buchnevich was a key to that unit. Unfortunately, cap considerations saw Buch traded to the Blues for Sammy Blais and a pick.

Another reason for the move was to give more ice time to both Alexis Lafrenière and Kaapo Kakko. Early in the preseason, Gallant gave Alexis a crack at RW with Kreider and Zibanejad. He played okay, but the head coach wants to keep the younger player on his natural wing and move Kreider, the veteran, to the right.

Kreider, 30, should be able to make the adjustment. Being a left-handed shot, it should create more opportunities for him to score, but make it harder on him defensively since he’ll be on his backhand in the D-zone.

This shouldn’t be a big issue, but if it doesn’t work out and Kreider has to move back to the left does that mean Lafrenière is going to the third line? Would Kreider move there? That scenario opens up several more questions on its own.

Filip Chytil and the Third Line

Chytil is just 22 years-old but is entering his fifth season in the league, fourth full time. Here’s the problem for Chytil, his career FO% is a lowly 39.6%. And even though he’s highly skilled, he really hasn’t been able to distribute the puck and elevate his wingers’. Plus, he has a reputation for being soft.

Let’s also be fair and stress he is only 22 years of age. Last season, he really played well but suffered a serious hand injury and got COVID. Maybe, the addition of Barclay Goodrow on his left side will bring out a tougher version of Chytil and he’ll use that 6-2″, 206lb frame to his advantage more.

Bottom line, he needs to find that next level this season. He also needs to be a lot closer to 50% in the face-off circle or he could lose his spot in the middle at some point.

Vitali Kravtsov – will he be sent down?

Coming into camp, I had Kravtsov penned into the Rangers starting lineup. But he hasn’t impressed anyone in camp and is now injured. Gerard Gallant says he is day-to-day and did not bring him on the bonding trip to Rhode Island.

I find that to be a little bit odd, unless the injury required more medical treatment than we know. Is it possible, since Kravtsov is waiver exempt that they may let him start the season in Hartford? How well would that go?

If Kravtsov can play in one of the next two games, he needs to make a statement and show he belongs. Otherwise, Julien Gauthier who has looked strong in preseason could take his spot on the third line. 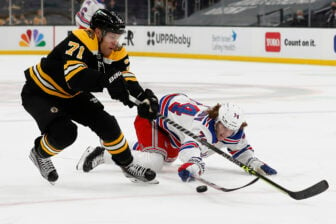 “We need to take a deep look at what everyone’s roles are,” Chris Drury said before the offseason began. “We’ve got to get to a place where when you jump over the boards you know what your role is.”

Well, he accomplished that by acquiring Goodrow, Ryan Reaves, and Sammy Blais. The Rangers bottom six has role players, glue guys, and a legit enforcer. The key now is for Gerard Gallant to make sure this group of 23 players know their roles and execute them immediately.

The Rangers are in a very tough Metro Division, and a good start to the season could be the difference between making the playoffs or just missing out.

NHL News: Lehner sits down with the league

After a weekend of ranting on Twitter, Robin Lehner sat down with the NHL. Here’s where we are at. Read more.