According to Andy Strickland, Rangers center Ryan Strome is drawing interest from around the league. He notes that the Ottawa Senators or one of those teams.

Strome is signed for next season and is on the Rangers protected list. It’s very likely that his name came up in discussions leading up to yesterday’s trade freeze. One logical train of thought is the Rangers are indeed heavily involved in the Jack Eichel trade chatter; or have another deal for a center lined up.

This would make Strome expendable.

He has been excellent since putting on the Rangers sweater and his chemistry with Artemi Panarin is outstanding.

The 28 year-old pivot is signed through next season at an affordable $4.5 million cap hit. Last season, he scored 49 points in 56 games. His best points per game production of his career at a .87 rate. Strome is a former first round pick that found his game in New York and blossomed.

Strome is without a doubt a late bloomer, but he’s caught the attention of other teams. If the Rangers want to move him, they will have no problem doing so. Of course, that should only be done if they have a deal in place for an upgrade at 2C.

Is there a deal for Jack Eichel on the horizon? The Flames were supposedly talking with a lot of teams before the freeze, so maybe there is a deal for Sean Monahan to be had. We will not know until the embargo is lifted on July 22nd. 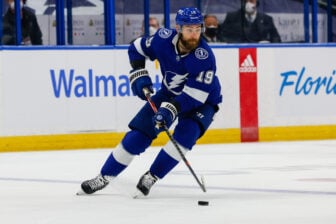 Seattle Kraken have plenty of stars to choose from

The NHL released all the protected lists of every team today. Included are all the available players that the Seattle Kraken can pick from on Wednesday, July 21st.

Ron Francis now has a plethora of players to choose from. Does he select PK Subban from the NJ Devils to be the star of his blue-line? Does he take two-time Stanley Cup champion Jonathan Quick to be his #1 goalie? Or what about Vladimir Tarasenko as his elite scoring winger?