Report: Ryan Strome out for Rangers in Game 4, Kevin Rooney in

According to multiple reports, New York Rangers center Ryan Strome is scratched for Game 4 of the Eastern Conference Final.

Strome, 28 skated at practice this morning but according to Renaud Lavoie of TVA, he looked uncomfortable.

“I hope he’s ready. I think he’s ready to go tonight,” Gerard Gallant said. “The trainers will tell me after they assess them all.”

Apparently, after warmups it was decided to keep him out.

Strome was injured during the second period of the Rangers 3-2 loss on Sunday. Tampa forward Ondrej Palat delivered a crosscheck to an unsuspecting Strome throwing him off balance and causing a lower-body injury that forced him out of the contest.

Kevin Rooney is the man stepping in on the 4th line. He will center Tyler Motte and Ryan Reaves, which was the case before Goodrow returned for Game 6 against the Carolina Hurricanes. Goodrow moves up to the second line right wing, slotting Andrew Copp in the middle.

Rooney, 29, has two assists in 12 playoff contests this season. During the regular-season, he played 61 games and registered 12 points (6G -6A).

The native of Canton, Massachusetts is a big body at 6-2 and 190 lbs. He can play the physical game and is considered an excellent penalty killer. 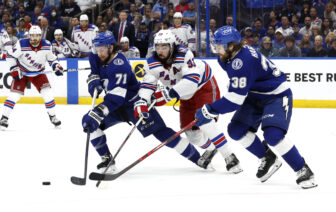 Also Read:
New York Rangers know they have to ‘take it’ from the Tampa Bay Lightning