The situation heading into Game 4 is somewhat precarious. It’s nice that the New York Rangers have a 2-1 series lead, but these are the two-time defending Stanley Cup Champions. When you have them down, you need to make sure they don’t get up.

Tampa Bay dropped the first two games of the Eastern Conference Final which put them in unfamiliar territory. Dating back three postseasons, the Lightning were in a 2-0 hole staring at the possibility of going down 3-0 in Game 3.

“We had to stop the Rangers’ roll,” Tampa head coach Jon Cooper said. “Hopefully, that goal with seconds left put a little pin in their bubble.”

Tampa’s bench boss is talking about Ondrej Palat’s game-winner with 41.6 seconds left on the clock to pull out a 3-2 win on Sunday.

While the victory did stop the Rangers four game winning streak that started in Game 6 against the Carolina Hurricanes, the mindset for the team remains the same.

“It’s another big game,” Gallant said. “We took care of our home ice but lost a tough one [Sunday]. You have to get ready for one game at a time. We have to compete, battle and play grittier than our last game.”

One of the storylines that emerged from the Lightning win was their objective to get physical with Igor Shesterkin.

On several instances they slashed, interfered, and collided with the Rangers number one netminder. However, there was one incident in particular involving Nikita Kucherov that had coach Gallant upset.

“I’ve got no concerns when you get into those areas,” Gallant explained. “The only concern I had out of the whole thing is when Kucherov come from behind him and stuck him in the back of the knee. The other plays are hockey plays and they happen. I don’t like the dirt behind the play like that.”

Tampa admitted that what they were doing in Games 1 and 2 were not effective and that the game plan was to get as close to Shesterkin as possible to distract him.

“Is part of this game being net-front? Yes. Is that in our game plan to knock people over? No,” Cooper explained. “Trust me, we’re not trying to hit the goalie. I think we were more angry about it than the Rangers were.”

Ryan Strome should be a go for Game 4

The New York Rangers got some good news on Monday regarding Ryan Strome, who was injured during the team’s Game 3 loss to the Tampa Bay Lightning. He left the game after a crosscheck to the back by Ondrej Palat which seemed to throw him off balance and cause a lower-body issue.

“He should be fine to go tomorrow,” Gallant said.

Strome scored 54 points (21 G – 33 A) in 74 regular-season games and has 9 points (2 G – 7 A) in 17 postseason contests to date. Andrew Copp slotted into the the second line center position in his absence with Barclay Goodrow moved up from the fourth line to play wing.

On the Lightning side, star center Brayden Point has been ruled out for Game 4

Point injured his leg against the Toronto Maple Leafs in Game 7 of the Lightning’s opening round series and has not played since. 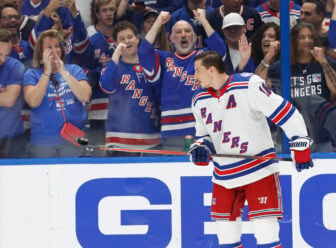