The New York Rangers got some good news regarding Ryan Strome, who was injured during the team’s Game 3 loss to the Tampa Bay Lightning.

Strome, 28, left the match after Ondrej Palat delivered a crosscheck to his back. He immediately reacted in pain and had difficulty skating back to the bench.

Later in the period, he came back and took one shift. As soon as it was done, he looked at the medical trainers and shook his head in the negative. Strome did not play the remainder of the game with the Rangers labeling it a lower-body injury.

“He should be fine to go tomorrow,” head coach Gerard Gallant said.

Strome scored 54 points (21 G – 33 A) in 74 regular-season games and has 9 points (2 G – 7 A) in 17 postseason contests to date. Andrew Copp slotted into the the second line center position in his absence with Barclay Goodrow moved up from the fourth line to play wing.

Kravtsov, 22, has rejected an offer from his KHL club Traktor indicating he is expecting to play in the NHL next season. This was expected with Larry Brooks noting in April that the plan was for him to prepare with the Rangers in the summer.

“Vitali Kravtsov did not accept the offer of the club,” Traktor’s Ivan Savin said via Sports.ru. “He did not explain the reasons for the refusal. Although we made an offer in full accordance with his requirements to remain with Traktor. Apparently, Kravtsov has decided to go overseas to play.”

The New York Rangers selected him in the 2018 Draft, 9th overall. Kravtsov’s situation and fallout with the organization has been well documented. It will be interesting to see if the two sides have reconciled their differences.

This past October, Kravtsov requested a trade after refusing to join the Wolf Pack in the AHL before bolting to Russia. That was the second time he’s done so with the first being in 2019, when he used his European Out Clause.

Before he left in 2019, then GM of the Pack Chris Drury reportedly admonished him and called him a quitter.

Kravtsov registered 13 points in 19 regular season contests and 10 points with 7 goals in 15 games postseason. Traktor lost in the Conference Final.

There’s still a chance that Kravtsov could be moved at the draft with the likely return being a second-round pick. 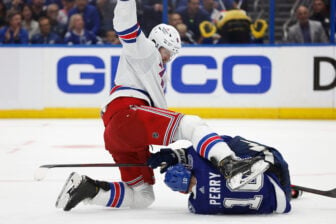 Also Read:
What really went wrong for the New York Rangers in Game 3

Will the Toronto Maple Leafs move on from Jack Campbell for a cheaper option? Is New York Rangers goalie Alexandar Georgiev it? Read more.