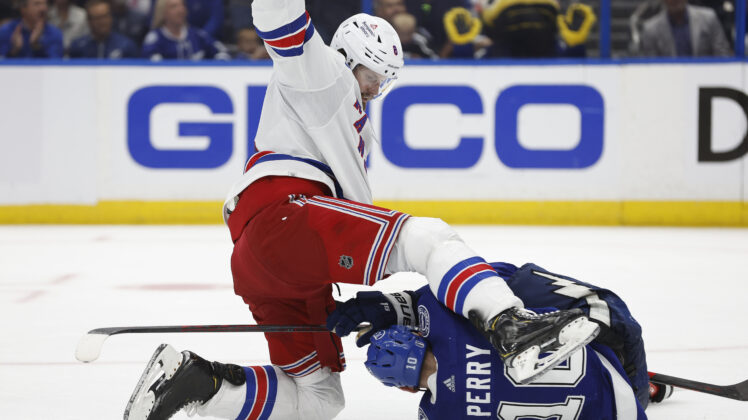 The New York Rangers were completely overmatched from the time Nikita Kucherov scored on the power play at the 10:50 mark in the second period on.

By the time Game 3 of the Eastern Conference Final ended, the Tampa Bay Lightning outshot the Blueshirts 52 to 30 and won the game 3-2.

Yet, despite being outplayed so bad the Rangers were just 41.6 seconds away from trying to win in it OT. Ondrej Palat converted an incredible backhand feed from Kucherov to get Tampa back in the series.

“They were the better team tonight overall,” Gerard Gallant said. “It went down to the wire and we had a chance to win late in the hockey game. Disappointing, but we will move on and get ready for the next one.”

So what went wrong for the Rangers in this game?

It was obvious from the onset that the Lightning planned to bump Igor Shesterkin early and often to get him off his game.

Did it work? Making 49 saves on 52 shots says no. Tampa also took two penalties on contact plays with Shesterkin that the Rangers converted on. Not exactly a recipe for longterm success.

With that being said, Gerard Gallant voiced his disdain for what the Lightning purposely and repeatedly tried to do.

“It doesn’t faze him”, he said. “It fazes me more than him. I don’t like it. Hopefully, when we talk to the supervisor tomorrow, they’ll take care of some of that because it wasn’t right.”

We can easily discount this a reason for the loss.

There’s a lot of talk about Jacob Trouba’s three minors being the reason why the Rangers lost Game 3.

Maybe some people should look at the disparity in shots that got worse with each period:

Trouba was called for three minors yesterday. The first was on a interference call that led to Kucherov’s goal in the second period.

The next one was of the weakest in the game with Trouba being called for a hold 37 seconds into the third period on Anthony Cirelli. That led to Steven Stamkos tying the game at two.

Trouba was called for a trip on the Rangers PP late in the third but it prevented a breakaway, so it was a good one to take.

“Troubs has been a rock for us all year. It’s not his fault,” Adam Fox said. “Some calls happen. That one at the start of the third, I don’t know about that one.. I don’t think anyone here is blaming Troubs, it’s nothing like that. He still does a lot of good things and still played a really good game, played hard. It happens. I’m sure he’ll be the same guy come next game.’’

Considering how big Trouba has been in these playoffs with series changing hits, we can put this silly one to bed.

The Rangers lost this game not because of anything they didn’t do well but because Tampa dug deep to play desperate hockey.

While the Lightning did everything in their power to avoid going down 3-0 in the series, it was still a 2-2 game with under a minute to play.

“It was 2-0, there was a lot of hockey game left and they were playing well tonight,” Gallant explained. “Fortunately for them they scored that power play goal to make it 2-1. It’s tough. I wouldn’t say we let it get away because they played really well, but we could have stolen one.”

In the end, Tampa needed Nikita Kucherov and Andrei Vasilevskiy to post their best performances in order to win. Meanwhile, this was a far cry from the Rangers peak effort in Game 1 and solid showing in Game 2.

New York has a huge opportunity to get a road win in Game 4 on Tuesday with a chance to close the series Thursday at Madison Square Garden.

They were right there in Game 3 but learned a valuable lesson. If you want to beat the defending champs you better be at you absolute best. 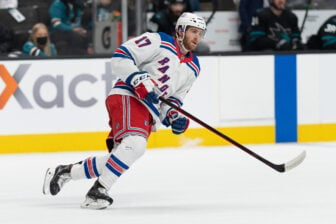 Also Read:
If Ryan Strome is out for Rangers, Kevin Rooney is next man up