The New York Rangers had a magical run last season as they emerged from their rebuilding years into a contender. Ryan Strome, who was a key member of the group, discussed that run in detail in a new interview.

“It was unreal and the best part about it was no one really expected it from us,” Strome said. “I don’t think we were favored in anyone of our series so it was pretty special. Coming together with a group of guys– that sounds cheesy, but it was honestly the best thing in the world.”

Appearing on Missin Curfew, which is hosted by former NHL players Shane O’Brien and Scottie Upshall, Strome also talks about free agency and his decision to sign a five-year deal with the Anaheim Ducks.

The New York Rangers finished the regular season with 110 points on the strength of 52 wins. It was certainly an incredible ride that ended with a trip to the Eastern Conference Final.

“The regular season everyone does their own thing but in the playoffs the team puts everyone together and it’s the best,” Strome said. “It was really fun for us and we proved a lot of people wrong.”

One thing was clear for Strome and many of the Rangers that have been here through the rebuild since 2018, the team was turning the corner. It really hit home at the trade deadline when Frank Vatrano, Andrew Copp, Tyler Motte, and Justin Braun were added.

“The previous years in New York had just been a fire sale,” Strome admitted. “Last year, was a different feel. You get a little confidence and then you add some nice names and you look up your lineup and realize you’re pretty steady.

“From my standpoint, when I got there four years ago the team was in the shits. It was a total rebuild and to get to where we got last year was a great feeling for the guys in the room. We made it happen and that was the coolest part.”

Unfortunately, Strome suffered a lower body injury late in the season that became progressively worse though the playoffs. The team fell to the Tampa Bay Lightning in 6 games with Strome playing in terrible pain and missing time.

“It was tough between all the freezing and painkillers it’s nuts,” he said. “You’re pushing your body to limit. I remembering waking up one morning calling my wife and dad– I’m almost in tears not knowing how I’m going to play today.”

There was a lot of talk prior to the season about naming a captain. Multiple reports suggested that Jacob Trouba was going to get the C sewn on his sweater until a late change of plans. Gerard Gallant and Chris Drury opted to go with six alternate captains, but it didn’t stop Trouba from leading the group.

“Jacob Trouba did a great job,” Strome revealed. “We got shellacked like 7-2 (Game 4) and we had a big team meeting. He got all the boys together and he really made everyone believe that you have to take it one at a time. You win that first one and we knew we’re going to win Game 5. If we bring it back to Pittsburgh you never know what can happen.

“Igor found his game a little bit and it wasn’t that he wasn’t playing that good. It just felt that whole series every call was against us, and every disallowed goal was against us. We just had to fight through that adversity and we found a way. That [Game 6] and Game 7 was unreal and we felt we were destined to win.”

Strome acknowledged that Trouba was a big presence on the ice and a key to the team’s success. However, he made it a point to emphasize the hard-hitting defenseman’s role off of it.

“He threw big hits but he answered the bell every single time. I can’t say enough about him as a player and a person,” Strome added. “I think he did an unreal job with the leadership group. A lot things behind the scenes that aren’t easy to do in New York. You got families living in Connecticut, guys living in the City, it’s not easy to put that stuff together.”

Strome, 29, had a solid season with the Rangers picking up 21 goals and 54 points in 74 regular-season games. In the postseason, he added another 9 points in 19 contests.

That helped him secure a 5 year deal with the Anaheim Ducks for $5 million per season. Strome admitted the Rangers were his first choice but similar to Andrew Copp’s post free agency comments, he sensed it wasn’t going to happen. The Rangers opted to let all their UFA’s walk and signed Vincent Trocheck as their new second line center.

“I wanted to stay for sure,” Strome said. “There was interest to stay but at the end of the year I got the vibe we were going different ways. My only regret is that I didn’t get to see the whole thing through.”

While detailing why he ultimately chose the Ducks, Strome revealed that there may have been an option to stay with the Rangers on a short-term contract.

“For me, I was looking to sign for as long as possible. I’ve got two young ones and for my wife it’s been tough living in rental houses and you never really know what’s next,” he explained. “There was an option to roll the dice and wait another year or two and see what happens but I wanted to be in a spot for the foreseeable future.”

In the end, Strome chose what was best for his family and no one can fault him for that.

“We came up a bit short but everyone was proud of our improvement,” he said. “Best of luck to those guys moving forward.” 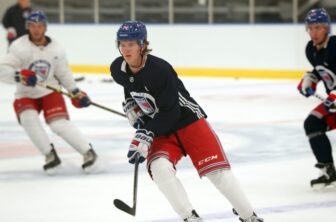 Also Read:
New York Rangers and Vitali Kravtsov are moving forward but for how long?