Jack Eichel and to a lesser degree, Evgeny Kuznetsov are continuously attached to the New York Rangers in trade rumors this summer. Everyone gets caught up in the fervor of trying to acquire them that you have to ask yourself – is it necessary?

Don’t get me wrong, either would make the Rangers better, and it was the Rangers themselves that started all this focus on a trading for a center. When reports surfaced they offered the Sabres a trade for Jack Eichel last offseason, it set fans and the media in motion.

However, that was a long time ago and there’s a lot of risk in bringing in either player. Plus Mika Zibanejad is due for an extension and there’s concern how to fit his cap hit in going forward.

Despite all this noise, Ryan Strome continues to prove he’s as good a number two center you will find – and he’s affordable at $4.5 million. He also won’t break the bank when up for a new deal.

Ryan Strome has been effective as a 2C

Let’s be honest for a moment, the Rangers do not need to trade for another top center. That’s not me saying they won’t, but the urgency everyone assumed was there is no longer the same. Listen, there’s 32 teams in the NHL so assume there’s an almost equal amount of #1 centers. This season, Zibanejad finished 19th among pivots with .89 points per game. Ryan Strome recorded .88 points per game, good for 22nd.

Why bring that up? Because Strome who makes only $4.5 million finished ahead of these following centers:

Strome is also a locker room leader and has chemistry with Artemi Panarin. There’s just a lot of positive signs that indicate the Rangers will be alright if Strome is the number two center come opening night.

Since joining the Rangers, Strome’s game has improved. This past season he notched 49 points in 56 games and 59 points in 70 contest the prior season. The 28 year-old is still in his prime and his numbers should continue to climb and get closer to a point a game status.

There’s a solid argument to keep Strome around. 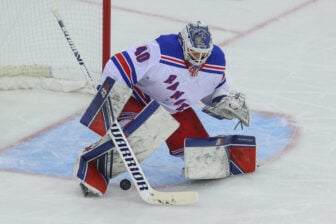 Why these hockey players deserve to be on hockey’s Mount Rushmore – read more.