The Rangers’ lack of grit was a common theme throughout last season. After adding pieces this year in order to improve in that area, they face a test to prove they are actually different. Tom Wilson recently made a comments that put a spotlight on the Rangers issues.

Obviously, the Tom Wilson ordeal confirmed what had been suspected about the Rangers all season: that they were too soft. The incident made it clear that the players didn’t have defined roles, something Chris Drury is working to remedy. Per Washington Hockey Now, Wilson said “It shouldn’t be a guy like Panarin jumping on my back… That whole situation — I won’t speak to it too much — but he shouldn’t feel like he ever should have to do that. So there are things in the game of hockey where teammates stand up for each other and stuff.”

Possibly the most concerning part about this comment is that Wilson is right. Artemi Panarin shouldn’t be the guy to jump into that kind of situation. Panarin is easily the Rangers’ most valuable offensive player. He needs to be protected. He wanted to stand up for Pavel Buchnevich and therefore went after Tom Wilson, but it doesn’t make sense from a strategic standpoint. Your top player risking their safety is never something you want, and in Panarin’s case it had consequences. He was out for the remainder of the season with an injury sustained during the scrum.

Panarin put himself in that position when others didn’t. Not only is this an indication that the Rangers were lacking a real enforcer, but also that it was unclear who should assume such a role should an event like this occur. Wilson’s statement just illustrates that the league was aware of this vulnerability and that it truly does matter even in this era of NHL hockey.

The most notable offseason addition is Ryan Reaves. He understands his role as an enforcer and takes it seriously.

The 6′ 2″, 225 lbs winger should be instrumental in turning the fourth line into more of an identity or checking line that makes other teams so successful. If he can stay in the lineup consistently, he will make a measurable difference. But one player is not enough to solve the grit shortage.

The Rangers also acquired Sammy Blais from St. Louis in exchange for Buchnevich. Blais plays fourth line minutes and in the last two seasons, has become very physical. In 2019-20, he recorded 155 hits through 40 games and in 2020-21, he recorded 103 hits through 36 games. He has the size for this kind of play at 6′ 2″ 205lbs. He does seem to be fairly injury prone. But if he can stay healthy, he will be effective on the fourth line with Reaves on the other side and either Kevin Rooney or Morgan Barron at center.

With these moves along with the general message and understanding that the team must be more physical and willing to fight, the Rangers will be tested. They will have to prove to the league that they can no longer be taken advantage of. The Rangers are going into this season with more defined roles than they did last season, especially in this department. So now players like Panarin can be smarter about physical situations and let others handle them. The team is better prepared heading into this season.

Note: All stats came from hockeyreference.com 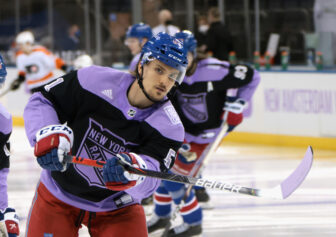 Also Read:
Report: Rangers cuts continue as Tarmo Reunanen and others are headed to Hartford; and updated practice lines

We can all agree that the soap opera that has become the Buffalo Sabres and Jack Eichel would rival some of the great TV classics. Slap an old soap title and it seems to fit. The Young and the Restless, or how about As the World Turns? Try on General Hospital for size, or One Life to Live. These titles seem to apply in one way or another.

One NHL Insider has an idea to help end this. Read more.