The NY Rangers had what was supposed to be an easy stretch of games last week that included three contests against the Ottawa Senators (2x) and Chicago Blackhawks. Instead of winning all three matches, they went 1-1-1 versus draft lottery teams.

They finally snapped a four game losing streak on Garden ice with a third period rally to defeat the struggling St. Louis Blues. Now this team faces their most difficult string of games this season starting tonight in Vegas against the Vegas Golden Knights, who sit third overall in the NHL standings.

“I hope we can maintain it for the next 55 games,” Gerard Gallant said after the win over St. Louis. “The streak we’ve been on the last two weeks hasn’t been good. We’re going to play Vegas, who’s a real good team, and Colorado a couple of nights later. We better be able to play well on the road.”

The Blueshirts are currently two points behind the Tampa Bay Lightning for the last wild card spot. Tampa holds two games in hand over New York.

These next four games are likely to have a major impact on what GM Chris Drury does heading into the second half. Depending on the results, the Rangers may be right in the thick of the playoffs or way out of a wild card spot.

First up is Vegas, followed by the Colorado Avalanche, who are the defending Stanley Cup Champions. New York then comes back home for two against the New Jersey Devils and Toronto Maple Leafs. Both teams are at the top of the league standings at first and fourth overall respectively heading into action today.

However, the Rangers are feeling confident after finally winning a game this season trailing to start the third period.

“It feels great to see what we can do when we turn our game on,” Vincent Trocheck said. “It’s even better that we were down one going into the third and being able to fight back. That’s what this team needed is a little confidence boost.”

Igor Shesterkin is expected to start in goal for the Blueshirts after stopping 25 of 29 shots on Monday and snapping his own losing streak of three games (0-2-1). It would also be his first career appearance against the Vegas Golden Knights.

One of the most interesting storylines will be if Gallant opts to keep Alexis Lafreniere and Kaapo Kakko with number one center, Mika Zibanejad.

“After the second I wasn’t liking what I was seeing,” Gallant explained. “I just wanted to try and spark something again. The two kids deserved some opportunities and I thought they played really well. And it made all three lines better.”

Kakko had several glorious scoring opportunities but was unable to convert. Meanwhile, Lafreniere assisted on the game-tying goal by K’Andre Miller and tallied the winner himself all in the final frame.

This will also be Gallant’s second visit to Vegas after he was fired back on January 15, 2020. He took the Golden Knights to the Stanley Cup Final in 2018, their inaugural season.

Vegas beat the Rangers 5-1 on January 6 in that contest. 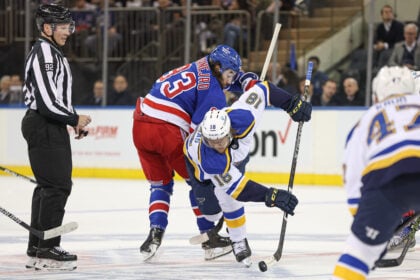 Also Read:
What are the top insiders saying about the Rangers recent struggles

The Vegas Golden Knights are one of the best teams in the league thanks to the leadership of new head coach Bruce Cassidy.

In Vegas’ last game, they beat the Boston Bruins in a 4-3 shootout to hand Cassidy’s former team their first home loss of the season.

Jack Eichel missed that game with a lower-body injury and is considered day-to-day. He has 29 points in 26 games this season. 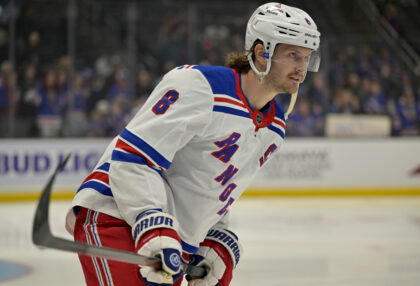