Although New York Rangers training camp doesn’t officially begin until next Wednesday, Vincent Trocheck hit the ice with his new teammates in Tarrytown on Tuesday.

“I’m excited [to get started],” Trocheck said. “Every year there’s this kind of limbo where we sit around waiting for the season to start. I think everybody is pretty eager to get going.”

This will be Trocheck’s first year in New York after singing a 7-year pact on July 13 with an AAV $5.625 million. Despite this being a new team, this isn’t the first time he’s changed uniforms.

“It’s different for sure, but I’ve been through this when I was traded from Florida to Carolina,” he explained. “Just trying to get a feel for everyone and try to make some friends.”

“[The center position] is an important part of any hockey team and it’s a hole we wanted to address,” Chris Drury said. “Just excited to have Vincent on board. He’s a real good player, does a lot of different things. We’re excited to have him.”

The Rangers social media team posted a quick clip of Trocheck on the ice today and called him Broadway Vincent. A pretty big nickname, but one that might stick if he has early success.

Trocheck wanted to play for the Rangers and Gallant

Trocheck admitted this offseason that he had the Rangers very high on his free agent wishlist. Plus reuniting with head coach Gerard Gallant was intriguing. Gallant coached Trocheck for a few seasons in Florida from 2014 to 2016.

“The opportunity to win was one of the main factors and having Gallant there was another factor,” Trocheck said on NHL Network. “Having the chance to go to New York City and win a Stanley Cup is a huge thing. It’s obviously something I haven’t done yet in my career and I’d like to do.

“Obviously, New York has a great team with a lot of young talent. Playing against them in the playoffs, they were a tough team to play against with a lot of firepower.”

The Rangers took their second round matchup against the Carolina Hurricanes in 7 games, coming back from a 3-2 series deficit. They would eventually lose to the Tampa Bay Lightning in the ECF.

New York’s feeling was mutual as Trocheck’s contract comes with a full no-move clause for the first three years and then turn to a modified no-trade for the remainder of the term. They view him as an upgrade over Ryan Strome, who signed with the Anaheim Ducks, because his came is better suited for playoff success. 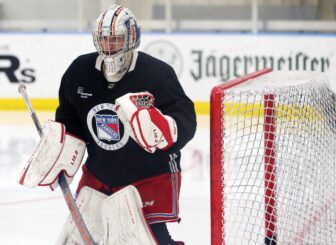