Where will former Rangers GM Jeff Gorton land next?

Former New York Rangers GM, Jeff Gorton is still without a home. Yesterday, John Davidson was announced as the President of Hockey Operations with the Columbus Blue Jackets. It was the same exact position he held before taking the job in New York.

“I want to be respectful as I can to the Rangers. I don’t want to get into too many of the private discussions we had because that is really between Mr. Dolan and myself,” JD replied to questions about his abrupt dismissal. “We decided to part ways.”

Where will GM Jeff Gorton land?

Jeff Gorton did a tremendous job with the Rangers. Well before JD got here, he was a quintessential component along with Glen Sather in the decision to begin a rebuild. After Davidson’s arrival, Gorton continued to do great work and JD gave him credit for it yesterday.

“I think that Jeff Gorton and myself, who are gone, when you look back at the work, that team has a chance to spring ahead very quickly,” JD explained. “They’re in good shape. I’ll just leave it at that.”

Some of those moves were trading Ryan Strome for Ryan Spooner for one. Trading up to select K’Andre Miller and Braden Schneider. The steal of Adam Fox. Acquiring Ryan Lindgren in the Rick Nash trade etc.

So where will Jeff Gorton end up and will it be as a GM or as President of Hockey Operations? Let’s not rule out the possibility of it being both.

One team that stands out a needing a change are the Buffalo Sabres. They recently brought in Jason Karmanos to assist GM Kevyn Adams. Mark Jakubowski is the current VP of Hockey Operations and could be the one to go. If the Sabres wanted to make a significant change, bringing in Gorton to take the role of President would be an instant win for them.

When it comes to taking over as a team president, maybe Gorton wouldn’t have to look further than the New Jersey Devils. He could help Tom Fitzgerald who is the team’s Executive VP and GM. It’s not like the Devils didn’t see up close and personal what he did with the Rangers and getting them on a winning path. NJ is also in the infancy stages of a rebuild and he could move it faster.

There is one team that is screaming for a change and that is the Anaheim Ducks. A team that needs to really start a rebuild and could use Jeff Gorton’s expertise. In Anaheim, I can see Gorton taking both roles as President and GM replacing David McNabb (Hockey Ops) and Bob Murray (GM). The Ducks are also a rumored player for Jack Eichel this summer.

So far, there’s been little to no chatter about where Gorton might end up, but these teams stand out to me. The offseason is very young, and we will see how this plays out. I personally do not believe Gorton will be unemployed for much longer. 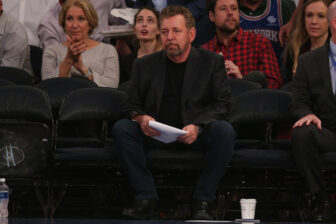 Also Read:
James Dolan and Glen Sather own whatever happens next with the New York Rangers

All of last night’s game’s recapped and the latest on John Tavares. Read here.