Will Cuylle excited to make Rangers debut versus the Maple Leafs

Head coach Gerard Gallant has confirmed that prospect Will Cuylle will make his New York Rangers debut against the Toronto Maple Leafs on Wednesday.

According to New York Rangers PR:

Cuylle would become the first Toronto native to make his NHL debut in the city for a team other than the Maple Leafs since Kirk Tomlinson of the MNS on Feb. 24, 1988. Only one TOR native has made his debut in the city while playing for the Rangers: Jim Drummond on Jan. 9, 1945.

“I was pretty excited,” Cuylle said about the call up. “It’s huge (to debut in Toronto). All my family is there and if I could pick a spot other than MSG to make my NHL debut it would be there.”

The Rangers have been very high on the 20 year-old since they selected him in the second-round of the 2020 Draft.

In 2021, the 6-3, 212 pound forward was invited to camp and impressed. Cuylle was extremely noticeable showing a willingness to use his size. Of course, the roster was pretty established so they sent him back to the Windsor Spitfires of the OHL where he notched 80 points in 59 games.

After winning World Junior Championship Gold with Canada in August, Cuylle continued to open eyes at this past training camp. He was among the latest cuts but took it in stride earning himself an AHL All Star appearance with the Hartford Wolf Pack on the strength of 13 goals and 20 points in 39 games to date.

“Solid kid, up and down,” Gerard Gallant explained. “Plays the game the right way. The coaches (in Hartford) said he’s done a real good job down there, so he’s earned a call. Give him an opportunity.”

At practice today, Cuylle rotated with Vitali Kravtsov, who is going to be the scratch. The youngster will be centered by Jake Leschyshyn with Julien Gauthier on the opposite wing.

“I’ve been scoring a bit (in Hartford),” Cuylle said regarding his style. “I’m going to bring a lot of energy on the forecheck here and try to put a couple of goals in the net too.”

As for Kravtsov, Gallant said out loud what we all know, he’s not a fourth line player. The NY Post’s Mollie Walker was also able to get the head coach to reveal that he would indeed be scratched.

“[Kravtsov’s] been fine, but again he’s not a fourth-line player,” Gallant noted. “He’s built to play in a top nine position… He’s been fine, I wish he’d score more, I wish he’d finish more checks and stuff like that. Overall he’s played about 20 games in a row and been okay.”

Come this July, he will be a restricted free agent and his been the subject of possibly being a moveable asset come the NHL Trade Deadline on March 3. 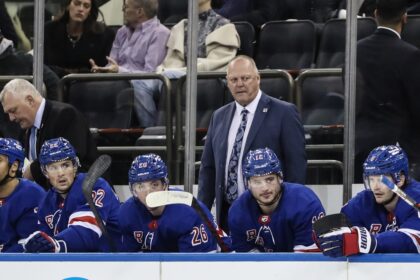