Another week is in the books for the Hartford Wolf Pack as they get right back at on Monday night against the Utica Comets.

The club only managed to collect two of six points in action last week. Despite the struggles, Hartford began to turn the corner over the weekend as they were close to a win on Friday against Springfield (3-2 loss) and were able to grab a victory Saturday against Hershey (4-3 shootout win).

Saturday’s win helps Hartford maintain home ice advantage in the first round of the playoffs. Hartford is currently fourth in the Atlantic Division with a record of 29-22-5-2 for 65 points (.560). If the season ended today, the club would face the fifth place Hershey Bears, who are 30-24-5-4 (.548). The Wolf Pack won the six game season-series with a record of 5-1.

This week features three games, with two home and one away. Entering play tonight, Hartford has 14 games remaining on the regular season. The magic number to clinch the playoffs sits at 20 points.

The 24 year-old prospect has brought life to Hartford’s offense. He provides another element to the lineup, utilizing his speed and being at the right spot when it counts. The forward came close to registering his first goal on Friday against Springfield as he attempted a wraparound. The opportunity was a close call as the puck bounced on Springfield’s goaltender and danced along the red line.

Saturday’s game featured his first point with a goal against Hershey. Merkley converted on on a solid redirect from Anthony Greco. His offensive abilities have also landed him on the power play with Hartford converting on two of three opportunities Saturday with the extra man.

The addition of Merkley has provided additional boost to Hartford’s offense. Through the small sample of three games, the forward has brought further depth in the lineup and has helped boost other forwards in the lineup.

Prior to Merkley joining Hartford, the forward played with the San Jose Barracuda in 43 games this season. He notched 11 goals and 25 assists for 36 points. I expect him to produce with the Pack given his abilities and role with the team. He is three points away from tying his season high of points (39 in the 2017-18 season).

Newly signed Rangers prospect Brandon Scanlin debuted on Friday against Springfield. In his two games played, Scanlin had an impressive start to his professional season. The 22 year-old defenseman’s strength is utilizing his body and making life hard on his opponents.

In addition to his physical game, he has a strong hockey IQ and read plays well. He is noticeable on ice and was paired with Jones. While his skating needs work, he has shown a strong potential for development. Offensively he ended up on the scoresheet in his second game, recording the secondary assist to Khodorenko’s tally.

A biggest negative for the Pack was their penalty kill. While Hartford ran into penalty trouble on Friday and Saturday (Wolf Pack took five penalties each game), the club was unable to effectively kill them off.

For instance, Hartford gave up two power play goals on Friday, which helped Springfield with their win. On Saturday, Hartford built themselves a 3-0 lead in the second frame. After running into penalty trouble once again (Hartford took two three penalties in the second, including a double minor), Hershey came back and converted on two power play opportunities within a two and a half minute span making the game closer than it needed to be. 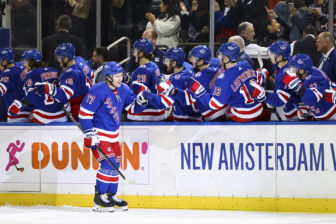