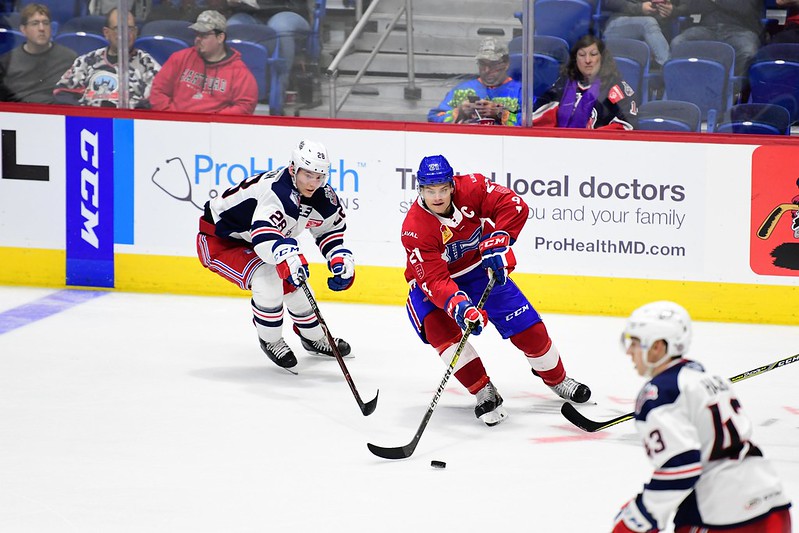 The boys have returned home from their Canadian road trip from last week, going 1-2 in The Great White North.

Hartford’s road trip began in Providence the previous Saturday with a 4-3 win at the Dunkin’ Donuts Center. To date, the Hartford is third in the Atlantic Division with a record of 4-3-1 with nine points. The Charlotte Checkers and Springfield Thunderbirds are tied for first with 10 points.

The Pack has faced difficulties in recent weeks, however, that should not discourage the Rangers prospects. The group has to work out the kinks while the season is still young.  Let’s take a look at what is happening in the “Insurance Capital of the World”.

In the past few games, the Wolf Pack power play has had difficulties scoring. But more than that, they have been giving up shorthanded goals as well. In 32 tries on the power play, the Wolf Pack has converted five times, while giving up three goals with the extra body. That was noticeable last Wednesday against Laval, as the group gave up two short-handed tallies. While not showing up on the scoreboard, the Pack have given up too many chances as well. The boys have to figure it out and ensure the power play helps their cause instead of hurting it. The power play ranks 22nd in the American Hockey League standings, converting at 15.6%.

Another point of concern is the team’s defensive struggles. In the contest against Belleville last Friday, Alexandar Georgiev faced a few breakaways and odd-man chances. Luckily the Pack were bailed out by the young goalie. In other games this season, they’ve given too many chances for the opposing teams. The Pack let the opposing teams walk in, crash the net, and generate opportunities. However, they are young and learning. There are going to be bad nights. They just cannot have it frequently.

For those who’s wondering what’s going on in Laval, Hartford’s night summer up. It’s been an ugly game… pic.twitter.com/EriJaSKtBv

Another potential worry is the Pack’s lack of offense. They can score in bunches, however, they can go moments where the offense goes quiet. You’d also like to see the team step up in moments when the game is on the line, especially in the late stages or on the power play. The veterans will have to step up to give the group the edge in tight contests.

The talented prospect has been a point per game player so far this season. In eight games, Lias Andersson has three goals and five assists for eight points. He is third on the team in shots on goal at 19. Tim Gettinger has 20 and Peter Holland has 22.

The Rangers sent down the prospect late last week to give the goalie some playing time in Hartford. He looked sharp, despite not having seen any game action in two weeks. Alexandar Georgiev made huge saves to keep the group in both contests from start to finish.

Here’s a look at one of the few solid saves Alexandar Georgiev had in the 1st. He looks sharp despite lack of playing time. #HWP #NYR pic.twitter.com/FQGwrrIl2b

On Friday against Belleville, the prospect stopped 25 of 28 shots for the win. On Saturday against Toronto, Alexandar Georgiev stopped 32 of 35 shots in Hartford’s 3-2 loss.

The prospect had himself a great goal last Friday against the Belleville Senators. With a strong indivudal effort, Ty Ronning pots in his first goal of the season. This is definitely a monkey off the back of the forward.

Hartford returns home for two games before going on a road trip to Pennsylvania next weekend.