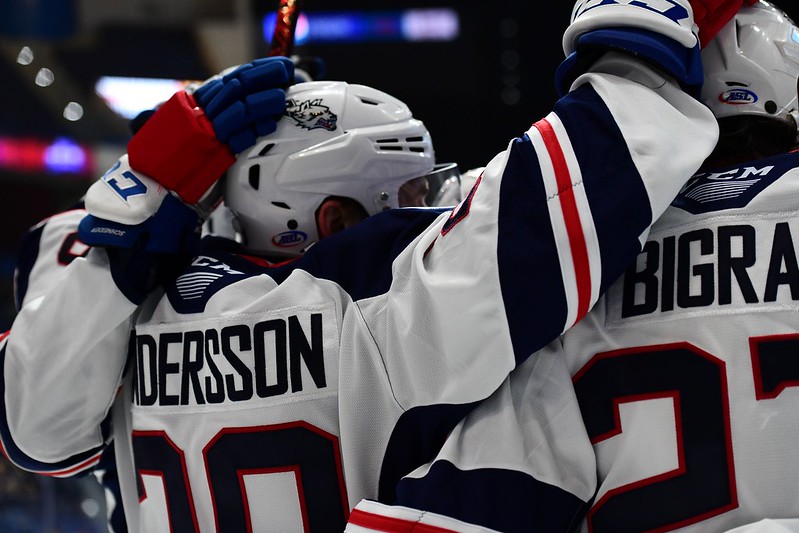 Entering the third week of the season, the Wolf Pack are second in the Atlantic Division. Lias Andersson has been leading the team to victory or helping the group inch towards tying close contests. The second week for Hartford has been interesting. The group hit a 0-1-1 snag and then ended the weekend with a win. After three games, the Pack is in good shape standings-wise.

The Rangers prized prospect had an active weekend. In the last four games, the forward notched two goals and four assists for a team lead of six points. Lias Andersson has goals in back to back games along with a fight to complete a Gordie Howe Hat Trick against the Providence Bruins in Saturday night action.

The forward had a dominant weekend in the American Hockey League. He showed the offense along with grit as he continues to develop tremendously.

The first year pro has shown some impressive strides over the last week. The prospect had goals in back to back games in Binghamton and Hartford. He is not afraid to crash the crease or get to the dirty areas. Both goals this weekend resulted in hard work and excellent positioning. Check out a goal that he scored on Wednesday night. He was at the right spot and capitalized on the chance. To date, Tim Gettinger has three goals and an assist for four points.

The Wolf Pack will be tested with their upcoming schedule in the next few weeks, with Hartford being mainly on the road, including a Canadian road trip. This is the chance for the roster to bond well and build up their confidence to play away from the home rink. The road trip kicked off last Saturday in Providence. Excluding the prior game, Hartford is on the road for three games in Canada. Then they will return home for two games before going back on the road. Eight of the team’s next ten games are on the road, which should be a great test for the group.

While this will not affect Hartford currently, it will down the road when determining the situation for playoff complications. The AHL has modified how teams enter the post-season. The league used to base standings on points percentage, but they have switched back to overall points. This will be easier for us to understand when taking a quick glance at the post-season opportunities in February, March, and April.