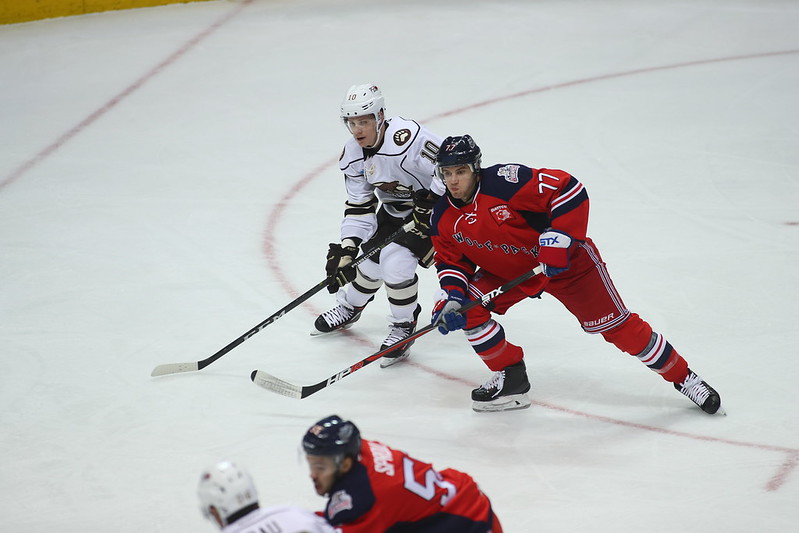 Last weekend was rough for the Wolf Pack. The club dropped all three games and struggled on both sides of the puck. This is their first big slump of the season and they experienced their first blowout of the season as well on Friday night against Bridgeport, losing 7-3. It will be interesting to see how they respond this upcoming week. The club last season did not respond well to slumps and they now have their work cut out for themselves. The team is currently 7-11-2-1, seventh in the Atlantic Division, with a point percentage of .405.

The Rangers prospect returned to the lineup on Friday night against Bridgeport after missing the last three games. He was noticeable in his first game back as he played chippy and with an edge; irritating Bridgeport at moments. DeAngelo had not participated in a game since November 12th, with how the schedule is set up in American Hockey League.  Offensively, he attempts to pitch in and despite producing two points in ten games, he is still making sure to get shots on net. In his previous two seasons in the league, DeAngelo could produce a good amount of points but has yet to find the spark in Hartford. Defensively, he needs to work on his game, but he can get physical and is not afraid of getting in the face of the opponents to cause problems. His defensive awareness and positioning need improvement, but he is trending in the right direction.

The rookie has shown offensive strides in recent days. He earned his first assist on Friday night and his second goal of the season on Sunday, giving him three points in 18 games with Hartford. Though he’s been struggling, remember that he is just a first-year pro. In addition, his minutes have been limited, for the most part, with Head Coach Keith McCambridge playing him as the 12th/13th forward.

I have to say, I wish he was given more opportunity to play with other forwards talented that are better. Having him play limited minutes while struggling can be tough for the rookie. In addition, having “gritter” linemates does not enable the forward to play to his fullest potential. I was expecting more from the forward. He could be a late bloomer and is probably still getting adjusted to the league. But if he can keep up this level of play, he might get promoted and show everyone what he can do.

In his second year in the American Hockey League, John Gilmour has had a strong turnaround from last season. His rookie year was rough on defense. Last season in 76 games, he recorded 6 goals and 19 assists for 25 points. Offensively he did well and coming into this season, he is stronger on defense. He’s improved his puck moving ability and has shown an ability to create on the power play. He’s improved in the defensive zone as well, with blocking lanes and attempting to position himself before the entire play develops. Currently, the defenseman has eight points (2G, 6A) in 16 games. He is on pace to get close to, if not surpass, his offensive totals from last season.

Last weekend had glaring issues given the three-game losing streak. In each outing, the club gave up plenty of shots on net. The goalies were continually busy, giving up a total of 106 shots (Friday 37, Saturday 30, Sunday 39). Hartford gave up 15 goals in the three games, while scoring just six. The entire team’s defense and goaltending has to improve for this team to get back on track.

Another issue was the lack of puck possession. They were chasing the puck for the majority of each game, and you cannot win games if you don’t have the puck. They struggle with forechecking and playing against physical teams. The Hershey Bears played a physical style of hockey which gave Hartford problems, while Springfield and Bridgeport were able to make plays in front of the Hartford defense.

The power play has cooled off as well. They had no power play goals in the three games and gave up a shorthanded goal as well. The powerplay was expected to cool down, but an 0/12 stretch over the weekend is not what anyone was expecting.