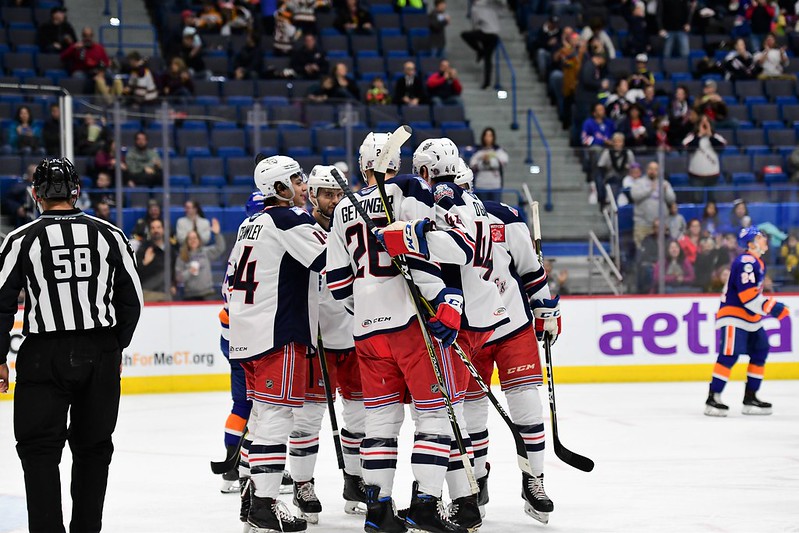 Looking back at last week for the Hartford Wolf Pack, let’s just say it was not pretty. The Pack have struggled after starting the season on a good note. What’s happening was unexpected, considering the roster coming into the 2018-19 season. However, a majority of these guys are young and will see highs and lows. How low? That will remain to be seen. Hartford resumes play over the weekend as they continue a five-game road trip before returning to home. Entering the weekend, the Wolf Pack recorded a record of 4-6-1 for 9 points. That sits the group tied for fifth place in the Atlantic Division, and the Pack is hoping to snap a four game losing streak.

Not So Hot Veteran Goaltending

In an area that was expected to give the Pack a fighting chance in every game, that omen was broken last week. Dustin Tokarski has not been himself since last Wednesday’s game against his former team, the Lehigh Valley Phantoms. The well known goalie gave up four goals in five shots in the opening 4:36 of the first period. Marek Mazanec played the remainder of the game, giving up three goals on 28 shots.

Saturday and Sunday proved more of the same in the crease. Mazanec was unable to make saves to keep the Pack in the game despite a back and forth contest. Marek Mazanec stopped 25 of 30 shots on Saturday night against Bridgeport. Dustin Tokarski played on Sunday, stopping 33 of 38 shots.

The goaltending has to improve. The duo was off to a good start, bailing out the club as the Pack coughed up the puck frequently and had excessive turnovers. Last week was not a good week. However, this is a team game and you cannot only fault the goalies. The defense also needs to be addressed. Let’s hope both goalies can regain their confidence and are able to carry the team with good leadership and experience.

The defense had tremendous struggles last weekend. One game was winnable, but the other two were blowouts. That is unacceptable. The Rangers are rebuilding and the prospects have to prove their value for the big club. How can you prove yourself if the defensive core is struggling and not producing? This makes the Rangers wonder what’s going on, considering that it is a rebuilding year. The Wolf Pack must be better than New York, not the opposite. Development is key. I understand the young troops are learning, however, not learning from mistakes that cost goals and losing three games in a row is concerning. The defensive group needs to step up as a whole. They’re struggling and must figure that out.

Last week, Hartford gave up 18 goals in three games. How much did the Wolf Pack score? Just nine.

Head Coach Keith McCambridge had made a few changes to the lineup regarding healthy scratches. He has also mixed up the lines in hopes for better chemistry.

It’s still early in the season to sound the alarm. I want the team to fix their issues and continue to compete in the fierce Atlantic Division. The weekend will be difficult for the group as well. They will have to play at full capacity.

The Pack started their road trip last Sunday in Springfield. This weekend features a trip to the Keystone State for the first three games in three nights weekend.