Zac Jones makes it clear to the Rangers; “I think I deserve to play in the NHL”

New York Rangers’ Zac Jones has the right attitude. On top of that you have to love his confidence. As the team heads into the final two exhibition games, with the 6th defenseman spot open according to Gerard Gallant, Jones made his thoughts abundantly clear.

“I think I deserve to play in the NHL,” Jones replied to a question on how he would feel if he were to start in Hartford.

Zac Jones has been impressive in camp

Since Development Camp opened, the 20 year-old defenseman, who was selected in the third round of the 2019 Draft has been stellar. Jones was excellent in the two rookie games against the Flyers and even outshined Nils Lundkvist, whom he’s battling for the last spot.

In his first preseason contest, Jones picked up a beautiful assist on the power play in NY’s 3-2 win over Boston. His final stat line was 1 assist, with a +1 rating and 3 shots on goal. Jones played on the PP and SH, finishing with 18:32 of ice time.

Jones followed that up with a decent performance in a blowout game. New Jersey thrashed the Rangers 7-1, but he managed to only be a -1 while totaling 22:35 of ice time. The most of any Blueshirts blue-liner that night.

However; Nils has found another gear and registered 3 assists while showing the talents that made him a first round selection. In particular, his shot and ability to quarterback a power play. This has given Lundkvist the edge in camp.

The Rangers will play the Devils on Wednesday and the Islanders on Saturday. It’s likely that Jones will at least get into the next game to make one more statement.

Jones is not a big physical defenseman, but his skating and puck moving ability make him standout. Furthermore, he has something very important going for him and that is high hockeyIQ.

So far, it’s hard to argue with Carvel’s assessment.

Jones joined the Rangers late last season and played in 10 games recording 4 assists. He certainly did not look out of place and was extremely poised. Whether he makes the team out of camp or not, there’s a bright future in the NHL for him. 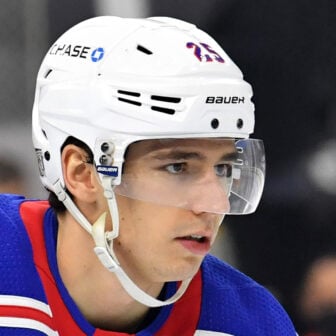 What’s the latest on NHL coaching extensions, and one insider says there is no market for Eichel. Read more.