A look back at our 5 bold New York Rangers predictions

In December, as the New York Rangers were heading into the New Year, I laid out 5 bold predictions.

At the time of the article, the Blueshirts were humming having garnered 42 points through 30 games and on pace for a 114 point season. I made it clear that breaking the team’s single season point record of 113 set in 2014-15 was NOT one of my predictions.

Let’s look back and those five bold predictions for 2022 and see how things went.

To start us off, I believe Adam Fox will be the first defenseman to win consecutive Norris Trophies since Nicklas Lidstrom won three in a row with the Detroit Red Wings from 2005/06 to 2007/08.

Fox, 23, from Jericho, NY is tied with Tampa’s Victor Hedman in scoring for defensemen with 31 points. While last season, he was considered a bit of an unknown, that’s not the case anymore.

Although Fox isn’t as flashy with the puck like some other defensemen, or physically imposing as others, his ability to always make the right play sets him apart. It’s those million little things he does in a game that has the entire NHL on notice and why he wins another Norris title.

Fox had a tremendous season and finished with 74 points in 78 games. He missed the All-Star game due to injury and it probably lingered beyond that. In the end, Roman Josi is a favorite to win the Norris as he registered 96 points in 80 games, 10 more points than Cale Makar.

This was a miss!

The Rangers best offensive weapon got off to a slow start this season but has dramatically picked up his scoring pace.

In his first season with the Rangers (2019-20), Panarin would have easily broken the 100 point mark but the pandemic cut the year short. He finished with 95 and had no chance last year with just 56 games. However, with 33 points in 30 games he’s only on pace for 90 this season.

My bold prediction is that the Breadman will pick up his play even more coming out of the break. This time Artemi will not be denied scoring 100 points for the first time in his career.

This one will go down as a miss but if this was a game of horseshoes, I’d certainly get a point for being closest to the stake. Panarin finished the season with 96 points but only played in 75 games. He was scratched in the final two games for precautionary reasons after an upper-body issue that forced him to leave the game against the Hurricanes on April 26.

Chris Kreider will not disappear

The importance of Chris Kreider to this team can’t be underestimated. He is considered on of the NHL’s fastest skaters and best net front guys in the league. Yet, in his 10 year career he’s never scored more than 28 goals. He’s hit that mark twice, once in 2016/17 and 2018/19.

Kreider, 30, has always been a streaky scorer but his penchant to go on long droughts without a goal has become an annual right of passage. He certainly has a nice cushion with 18 goals in 30 games, but too often we’ve seen his hot starts fizzle.

It will not happen this season.

Thanks to an excellent power play, Kreider will not only break the 30 goal mark for the first time, he will hit 40.

Nailed it! And then some!

What a year for Kreider, who ended the season with 52 goals and 77 points in 81 games. His 26 power play goals also led the entire NHL.

While Carolina’s Rod Brind’Amour seems to be a media darling for coach of the year, what Gerard Gallant will do in his first season in New York can’t be ignored.

He has the Rangers among the one of the top team’s in the league with a .700 points percentage. That’s tied for third best in the NHL with the Toronto Maple Leafs.

Gallant last coached in the NHL during the 2019-20 season, but it looks like the 58 year-old bench boss hasn’t missed a beat. If the Rangers continue at this pace voters will be hard pressed not to select him.

Since its inception, no New York Rangers coach has ever won the Jack Adams Award. That ends in 2022.

Per Vegas Insider, Flames coach Darryl Sutter is the favorite at +200 with Gerard Gallant right behind him at +300. I recently wrote in detail why I think Gallant will win it here.

In 2018, the New York Rangers sent out a letter to fans announcing a rebuild. Many painful trades of fan favorites and the eventual buyout of legendary goalie Henrik Lundqvist were endured.

Now out of the ashes a perennial Stanley Cup contender will rise. Led by stars like Artemi Panarin, Mika Zibanejad, Adam Fox, and another great goalie in the making named Igor Shesterkin, NY will make an improbable Cup Final appearance.

Unfortunately, they are likely to face a stacked veteran team that’s been built to win for years. I expect in some sort of twist of fate, Gallant will lose to the club he brought to the Stanley Cup final in 2017/18.

Even though they will fall short, it will be the first of many long playoff runs with at least one Championship in their near future.

The Stanley Cup playoffs begin on May 3 for the Blueshirts and they have as good as chance as any in the East. Part of my prediction was that the Rangers would lose to the Golden Knights in the Final. Well, Vegas has been eliminated so maybe this prediction should read the Rangers will win the Cup. 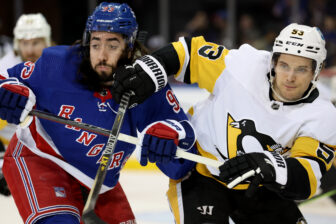