Beyond Broadway: Sharks in trouble? Pettersson for Calder? 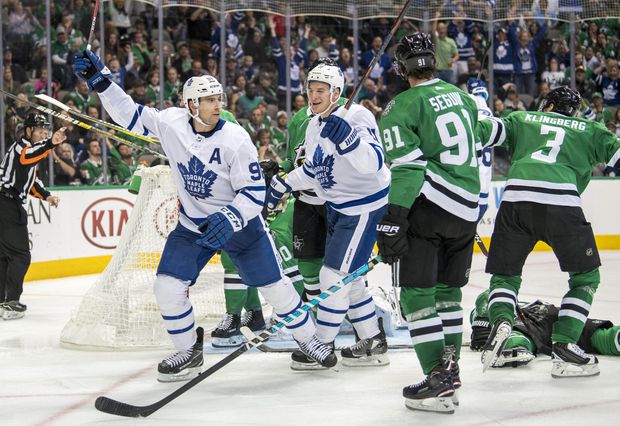 I’d like to welcome all our readers out there to Beyond Broadway, the weekly update of some of the most intriguing storylines in the NHL that don’t revolve around our beloved Blueshirts. Each week we will take a dive into some big stories, some weird stories and some of the funny stories around the league. This NHL season is barely a week old and there’s already a bunch of stuff to dive into. Let’s get started.

Pump The Breaks In Toronto

The Toronto Maple Leafs seem to be the team that everyone thought they would be going into the season; a high-powered offense with a questionable defense. Their wild 7-6 overtime win over the Chicago Blackhawks seemed to bring us back in time to the 1980’s for a few hours. Huge goals and dueling celebrations (I’m looking at you Auston Matthews and Patrick Kane) combined for a night many hockey fans won’t soon forget.

Auston Matthews makes it 6-5 and silences the crowd. Patrick Kane makes it 6-6 and mimics the celebration. Matthews grins on the bench pic.twitter.com/l4nTOFgCzu

Are these Maple Leafs for real?

Answer: Not just yet.

They may be able to score at will, but they will need to make a move for a top-notch defenseman sooner rather than later. The William Nylander situation is also dragging on way too long. If he really won’t come down from his $8 million a year asking price, then the trade market must be explored by first-year GM Kyle Dubas. It’s been rumored that the Carolina Hurricanes are very interested. Could Justin Faulk, Adam Fox and a first round pick get it done? Stay tuned folks.

Everything Is A-OK In San Jose

You just knew the questions would start popping up and the underlying worry would be there if the San Jose Sharks got off to a slow start. Granted, it’s only been four games and the Sharks have not looked as spectacular as many thought they would but there is no reason to worry in San Jose… is there?

Erik Karlsson is the best defenseman in the world when he’s on his game. Let him get acclimated to Peter DeBoer’s system and the Sharks will reap the rewards. Joe Thornton’s recent injury isn’t related to any ligament damage so he will be back soon as well. You already know guys like Logan Couture, Joe Pavelski, Evander Kane, and Tomas Hertl will step their games up, and you can never be out of a game with someone like Brent Burns on your blueline. The Sharks will most likely win the Pacific Division and have a lengthy playoff run. It’s all about getting those cobwebs off early in the year.

A Goal Drought In The Arizona Desert

Two games. No goals. That’s the current situation for the Arizona Coyotes. With an offseason full of optimism and hope that things would soon get better for a franchise that just can’t seem to get it right, this was not the start any of their fans, players or management was hoping for. The Coyotes have played two strong teams in the Dallas Stars and Anaheim Ducks, but to not even be able to muster one goal in two games, should people start to worry?

Now, this might be a bit premature, but the Coyotes have some work to do. Every year it seems they think that it’s the year they start turning things around but it just never comes to fruition. This team needs a win in a big way and with a schedule coming up that includes the Blackhawks, Jets, Wild and Blue Jackets, they need a spark soon or they risk another lost season.

The early returns on Vancouver Canucks super prospect Elias Pettersson have to be even better than the team imagined. With six points in three games, including three goals, Pettersson is performing better than advertised. He lit up the SHL last season, winning MVP honors and winning an SHL title, and hasn’t looked a bit out of place in the Canucks lineup where he primarily plays with Loui Eriksson and Nikolay Goldobin. Is he the early Calder favorite?

Pettersson, of course, will a slow down a little at some point, but with Brock Boeser and Bo Horvat getting most of the attention from top defensive pairings, Pettersson will have some easier matchups over the course of the season. 50-60 points are extremely like for the rookie center. I don’t think he hits that 70-80 point mark just yet, but, in time, he will be the Canucks number one center. He will be that elite number one center every team needs to win a Stanley Cup. Believe in Pettersson.

Thanks for reading! Beyond Broadway will be back next week as we dive into more NHL news!