Frustrated Gerard Gallant rips into his Rangers over crappy performance 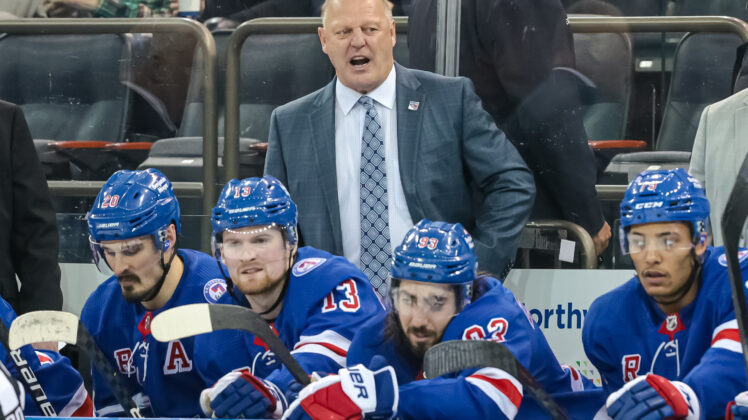 The New York Rangers haven’t had too many no-show games this season and when they have Gerard Gallant has kept his composure. However, in Friday night’s 3-0 loss against the desperate Islanders, he laced into his listless bunch.

“The Islanders played a good game and we were horseshit,” Gallant said with a stern tone. “But at least we do it together as a team. Like the great game we played in Pittsburgh (3-2 win Tuesday), we did it as a team. Tonight, we get the other side of it.”

The head coach knows that this late into the season with the playoffs just around the corner is not the time to come up limp in these kind of games.

Last night, the Rangers outshot and out-chanced the Islanders. Wherein lies the problem sometimes with advanced analytics, it was never really close or a threat to the Isles. They came in and let the Rangers carefree play with the puck do themselves in.

“Looked like we were skating in quicksand all night,” Gallant said in disgust. “I mean, you guys see the difference. We move the puck up the ice, we’re a pretty good team. We start dancing around a little bit, standing around, turning it over, that’s what you get.”

The usually measured and positive head coach decided it was not time to give his team any excuses. He called them out repeatedly for what was an inexcusable performance this late in the year.

“We never got into it,” Gallant said shaking his head. “We threw a couple of hits in the third period when it was 3-0, it’s too late then. Come to the rink ready to play and compete. It looked like we were reaching for pucks all night.”

If there was one player that probably should be exempt from Gallant’s criticism it was Artemi Panarin. He was the driving force in yesterday’s contest and played on three different lines through the night to lead the team in high-danger chances.

He was asked after the game what he thought about what happened and he didn’t mince words in his native Russian. His response caused his interpreter to pause and clean up what he said as best as possible.

“We dirtied up our pants,” Panarin’s translator finally said.

Mika Zibanejad was certainly more collected in his thoughts but still had a hard time discerning what took place.

“I wish I had an answer,” Zibanejad said. “It’s just not acceptable. It wasn’t good enough. The last game we played against them was a good hockey game. But we (tonight) we didn’t come up to pour standards and our level. That’s on us.”

The Rangers will get a chance to show themselves and their coach something when they take on the Flyers on Sunday. Anything short of a thorough win against a lesser opponent will be unacceptable.

Expect to see Justin Braun reinserted into the lineup to face his former team. Rookie Braden Schneider had a tough one as he was on the ice for all three goals against.

While the team has not mathematically clinched, it’s nearly impossible for them to miss out on the postseason.

Per the website MoneyPuck, the New York Rangers chances of making the playoffs has jumped up since last month from 98.2% to 100%. Some additional odds have them a 2.3% to win the Metro, and a .4% chance of winning the Cup.

The New York Rangers magic number is 9 points to clinch a playoff spot.

The Rangers and Florida Panthers strong March moves them up the power rankings chart. Read more.