Head coach Gerard Gallant met up with the press after practice today to discuss the NY Rangers upcoming trip to Rhode Island. The annual preseason excursion is meant to strengthen the bond between teammates as they get together for golf, dinners, and other extracurricular activities.

The Rangers also announced that they’ve trimmed the roster down to 29 players after sending down Will Cuylle, Ty Emberson, Tim Gettinger, Lauri Pajuniemi and Andy Welinski to the Hartford Wolf Pack.

Yesterday, both Gettinger and Welinski were on waivers for this purpose.

As for the others, we wrote this morning that they were on the list of next players to be cut. 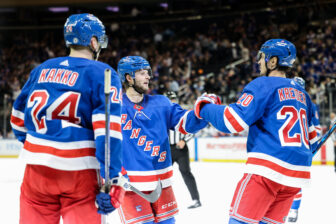 Here’s a breakdown of the 29 players remaining:

You can expect that list to dwindle down to one or two more names by tomorrow since Domingue is on waivers today.

As for what spots are open, Gallant revealed that it’s really only two.

So who is in the mix? Aside from Zac Jones likely winning that open spot on defense with his excellent training camp and preseason Libor Hajek, Jarred Tinordi, and Matt Bartkowski are battling for the 7th defenseman spot.

The big question is the 13th forward, since I believe Ryan Carpenter was alway penned into the opening night roster.

“[Gauthier] is a guy that had a great camp,” Gallant said. “But you see our roster and they have to battle for those spots. He’s one of those guys that’s in the mix. We’re a real good hockey team and we got better. Our young players are real good so there’s a lot of guys fighting for that fourth line opportunity.”

The general consensus is that 29 year-old Jimmy Vesey has the inside track to land the job. So far he picked up 1 goal and 2 assists in two preseason games while being excellent on the PK.

“We expected that (from Vesey),” Gallant noted. “Once he signed a PTO here we knew he’s a good player and what he did last year. Obviously, he’s in the mix with those guys.”

Regardless, this won’t be an easy decision and Gallant will use these last two preseason games to make that determination.

“We’ve got tough decisions to make and there’s going to be some good players not make our hockey team,” Gallant admitted. “That’s the way it works. It’s a good problem to have.”

As we mentioned before, Louis Domingue is on today’s waiver wire expected to be on his way to Wolf Pack if he clears.

The New York Rangers inked Domingue this offseason after facing him in the first round of last year’s playoffs. In six games against the Rangers, he posted a 3-3 record. He signed for 2 years with a cap hit of $775,000.

The left-handed goalie played in two preseason games and stopped 29 of 32 shots in 60:32 of total ice time.