Last weekend was tough for the Hartford Wolf Pack as the group was unable to secure points in their two outings. I

Hartford fell short against the Lehigh Valley Phantoms despite having a two goal lead dropping a wild game by the score of 6-5. Then on Sunday against the Wilkes-Barre/Scranton Penguins, Hartford was flat until the dying minutes to get back into the game but ultimately fell 4-2.

As we enter a new week, the Wolf Pack still maintain good positioning in the Atlantic Division. Hartford continues to hold third in the division with a record of 27-18-5-2 for 61 points (.587). The Providence Bruins are in second place in the division and dropped three straight games. The Bruins are 28-17-3-3 for 62 points (.608) and Hartford still has the ability to move up in the standings.

For the upcoming playoffs, keep in mind that Hartford will have a week off prior the start of the 2022 run as the regular season ends on April 30th. The Wolf Pack’s last game is on April 24th. A first or second play finish will extend the time off with a first round bye.

Hartford will have the opportunity to earn six possible points beginning on Wednesday to conclude their five-game road trip.

The experienced forward has found himself on the scoresheet in recent weeks. Ronning has points in three straight (two goals, one assist) and in the last eight of 12 games (five goals, six assists). Ronning heating up is great timing for Hartford as the regular season is winding down.

Ronning continues to be reliable piece for the Wolf Pack. As the season progressed, he is becoming more comfortable with bigger games coming up. Ronning has shown strides against tough opponents and in critical situations.

The 28 year old veteran had another productive weekend with points in both outings to extend his current point streak to eight games.

In that span, Greco recorded three goals and eight assists for 11 points. The forward continues to pepper shots against goalies and earns multiple scoring opportunities throughout each game.

While Hartford’s captain Jonny Brodzinski is still up with New York and Tim Gettinger returned recently to Hartford, Greco is the workhorse to make up for lost offense and has given Hartford opportunities to secure points in the standings. Greco is another reliable forward for the group, especially on offense. You will notice him in each contest.

The 24 year old Rangers prospect is nearing completion of his first full regular season in the American Hockey League. Through 42 games, Rueschhoff collected 14 goals and eight assists for 22 points. The forward has shown strides in his game, especially on offense.

While Hartford was depleted from the taxi squad, Rueschhoff took the opportunity and ran with it, generating strong offensive opportunities and converted on them multiple times. In recent weeks, the prospect continues to generate chances. His defensive aspect is solid as well, helping with the transitional plays and is reliable on all zones of the ice.

Rueschhoff is being rewarded with his offensive opportunities once again as the forward has points in four straight games (two goals, three assists). He also recorded a two point night last Saturday against Lehigh Valley. His strong efforts and determination continues his steady development in Hartford.

The 20 year old is also in his first full season in the AHL as well. Skinner provides a physical presence in the lineup and is playing well in recent weeks. The Rangers prospect has helped Hartford in the defensive zone, with blocking shots and pushing opponents away from high scoring areas.

Skinner keeps his plays simple and will occasionally appear on the scoresheet when the opportunities arises. Skinner is a gritter defenseman that Hartford needs and is not afraid to drop the gloves or play in the dirty areas. See below when Skinner dropped the gloves after a hit on Cristiano DiGiacinto.

Prior to Wednesday’s game, Hartford’s magic number to clinch a playoff spot stands at 27. You can check the playoff primer here as it is updated every morning. 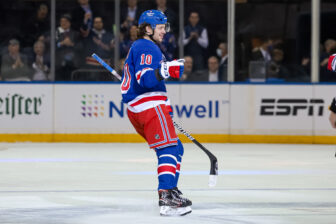