The completion of the 2021-22 season is around the corner for the Hartford Wolf Pack. Three games remain for the group after completing their seven game road-trip, which yielded three of a possible 14 points.

Struggles in the second half of the season continue entering the last week of play for the Wolf Pack. However, despite the continual losses, Hartford has the possibility to reach the playoffs as long they win this weekend.

Currently, the Bridgeport Islanders are in the last playoff spot with two games remaining. Both clubs will face each other on Saturday which is a do-or-die contest for Hartford. The Lehigh Valley Phantoms also have hopes for a playoff spot, but face an uphill battle being last in the Atlantic Division and have work to do to jump the Wolf Pack.

If Hartford fails to quality for the 2022 Calder Cup Playoffs, this will be considered a significant collapse. For a season that had great promise, the team fell hard and fast in the last three months.

You have to wonder if changes will occur, from the coaching staff to the roster. A lot is on the line for everyone in Hartford and this weekend will put them all to the test.

The Wolf Pack’s last appearance in the Calder Cup Playoffs was in 2015.

There are a few possibilities as we enter the last three games for the club. The best scenario is Hartford winning all three games, which essentially would bump Bridgeport from their spot. However, depending on the situation with the Lehigh Valley Phantoms, Hartford may have to hope that the Phantoms drop a couple of their games. Keep in mind that the season ends on April 30th and they have games remaining once this week concludes for Hartford.

If Hartford drops their biggest game of the season on Saturday against Bridgeport, that could be the final nail in the coffin. Any losses on Friday against Charlotte or Sunday against Wilkes-Barre/Scranton, they could be in a decent spot as long Bridgeport drops their Friday game against Springfield and Hartford wins on Saturday.

You can check the daily updates in the American Hockey League’s Playoff Primer.

The group’s offense has dried up throughout their road-trip. Hartford has been held off the scoresheet in 5v5 action for nine periods. That has to end this upcoming weekend. Hartford managed to score two power play goals in that span.

The Pack’s once potent power play has tailed off. However, the unit has produced goals as of late to help jump start the offense again. The downside is they still make careless mistakes and gave up a short-handed goal recently.

In addition to offensive woes, the defense had hiccups in recent weeks. The penalty kill is weak and has become unreliable. Opponents have capitalized on Hartford’s weaknesses, especially with the unit’s confidence low.

Opponents have solved Hartford’s style of play and the Wolf Pack continue to play catch up in all three areas of the zone. The slump involves the roster as a whole and hopefully they break out as a bunch this weekend. The goaltenders can only do so much to keep the group in games, especially when offense is lacking.

Entering the weekend, Hartford has dropped three straight games. The club was unable to secure any points out of the possible six last weekend. They are also 1-8-1 in the last ten games and 3-16-2 in their last 21 outings.

The month of April has been harsh for the group. Thus far, Hartford is 1-7-1. March had a record of 4-8-1 while February saw them go 5-4-1. These last three months are why their playoff probability took a huge nosedive.

Hartford’s last three games on the docket is a three in three weekend. 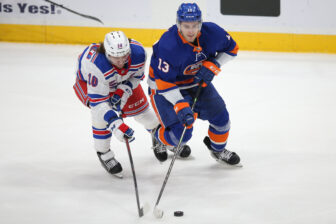