The playoffs are around the corner in the American Hockey League as the journey begins in the first week of May.

The Wolf Pack’s 2022 Calder Cup Playoff outlook has plenty of unknowns. Whether that be seeding to even if they make it at this rate. Their performance in recent weeks have precariously left them teetering and holding on to the last playoff spot (sixth in division).

The club has six games remaining on the docket over the next two weeks. They are off in the final week of the season which will leave them scoreboard watching.

Analyzing the week ahead, the Wolf Pack will have three games remaining to finish their seven game road-trip. The last weekend for the group will have Hartford home in the last two of three games.

The 28 year old veteran continues his solid performance in Hartford in last week’s action. This season, he’s collected 19 goals and 37 assists for 56 points in 60 games. That ranks Greco 19th in the AHL for points. He is also 12th in the league in assists.

Greco’s career high in points is 59 with the Springfield Thunderbirds (Florida’s affilate at the time) in the 2018-19 season. I expect the veteran to set a new career high by the end of the regular season.

In last Sunday’s game against Charlotte, Greco had a terrific outing to help Hartford snap a seven game losing streak. He secured one goal and three assists and was on the scoresheet for all of Hartford’s goals.

The veteran is nearly a point per game player at .93. This dominant performance comes after being held without a point in the last three of six games. Greco does not get held off the scoresheet for long. When he returns, he makes it known.

Greco’s consistent performance is vital to Hartford’s fight for playoff positioning. He has continued to play well despite being moved around the lineup, ranging from the first line to the third at times.

The Rangers prospect continues to perform well this season. The defenseman is active on all fronts and has elevated his game this past week.

On the offensive side, Jones continues to be reliable with strong passing and assisting in sequences that resulted in goals. The 21 year old has points in three of the four games played last week (one goal, three assists).

Defensively, he’s shown continual growth too, playing disciplined and being effective against opponents with his positioning, utilizing his hockey IQ well.

Jones has also shown some fight in his game when he dropped the gloves for the first time in his professional career. Jones attempted to spark Hartford after struggling in the first game against the Checkers and held his own.

While also being physical, Jones is still playing both ends of the ice very well and is the most likely call up if the Rangers need a defenseman.

Hartford’s win against the Checkers in Sunday puts to bed of not being able to win a game in the city. Prior to Sunday’s win, the Wolf Pack were 0-15-1 against the Checkers regardless of the arena in Charlotte (Checkers played in the Spectrum Center from 2010-15 in the AHL).

The win should boost confidence in the group as they were able to fight through adversity and have an outcome that favored them.

The final meeting between both clubs in the six game season series return to Hartford on April 22nd.

Entering Wednesday’s game, Hartford’s magic number stands at ten. Scoreboard watching is essential as Bridgeport is close in the standings with Hartford. However, the Wolf Pack have the advantage with two games in hand on Bridgeport and both clubs will meet for the final time on April 23rd. Hartford owns the tie breaker against Bridgeport as well.

Another team to watch is the Lehigh Valley Phantoms. Despite being last in the Atlantic Division, the group has nine games remaining. They have work to do, but they have enough games to get close to Hartford’s positioning if they get on a lengthy point or win streak.

Check out the latest updates below.

The Wolf Pack will go on their second Canadian road-trip of the season, followed by a trip to Rochester, NY. 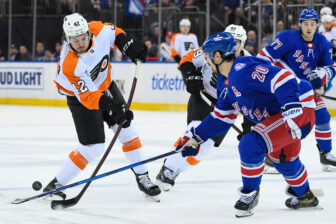