Bojangles Coliseum continues to be a house of horrors for the Hartford Wolf Pack. The team was unable to secure just their second franchise win against the Checkers last week and are now 1-15-1-1 lifetime. The Wolf Pack’s lone win in Charlotte came last year on April 10, 2022.

Despite starting the 2022-23 season 0-1-1, the group showed flashes of their offensive potential. The best player from opening weekend was Will Cuylle, who was ready to play and had strong outings in two games on the road trip.

Defensively, the Pack will continue to make adjustments, which struggled at times in the two games. It will take time for the group to build on chemistry and get used to each other. On the plus side, Hartford secured a point in a tough building.

As we approach this weekend, the Wolf Pack will return home for opening night and then will take on the Bridgeport Islanders on the road.

Will Cuylle Impresses Early On

Through two games, the Rangers prospect found himself on the scoresheet quickly. The 20 year old secured Hartford’s first goal of the season last Friday. In Saturday’s game, he helped setup a nice play to secure his first assist.

In addition to his points, Cuylle had a couple of solid opportunities offensively as he was paired ON Hartford’s top line with Jonny Brodzinski and Julien Gauthier. The prospect looks promising and has started the season on the right foot.

The Wolf Pack elected to start rookie Dylan Garand in last Saturday’s contest. Despite recording a loss, the prospect had a stellar debut, stopping 28 of 30 shots. The Checkers were consistent in their opportunities, especially with the high quality chances they developed throughout the game.

The Wolf Pack’s defense struggled in the game and when they did, Garand rose to the occasion. He certainly has confidence and it showed in his game. I am excited to see him play once again to see how he handles additional various situations.

The following players were assigned to Jacksonville:

As expected, Jonny Brodzinski returned to Hartford with captaincy for the 2022-23 season. The alternates for the season will be forwards Turner Elson and Tanner Fritz. However, Tim Gettinger was not given the “A” after wearing the role last season.

Hartford rolled out the following lines in Saturday’s contest:

Hartford rotated Austin Rueschhoff, Bobby Trivigno, Karl Henriksson, and Gustav Rydahl over the weekend. Rydahl was removed on Saturday as he is out day to day. He should be back for the upcoming slate of games.

The Wolf Pack will be streaming all games this season! In previous seasons, the team broadcasted home games with select away games. Tune in for free all season long through Hartford’s Mixlr account.

All broadcasts will feature a pregame as well beginning approximately 15 minutes prior to puck drop.

Hartford will have two games on tap this weekend: 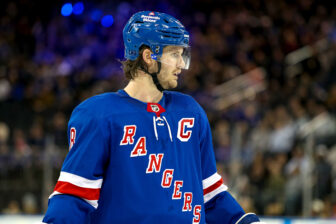